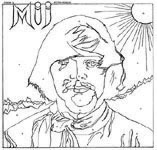 This is an unusual record—one that defies category and in terms of production is quite beyond regular horizons. The musical legend is that MIJ (Jim Holmberg) was a musician who, after a serious accident that fractured his skull, then healed, but began a mind-altering journey. For instance at a time just before making Yodeling Astrologer (ESP-Disk, 1969) Jim Holmberg heard created sounds that he did not remember hearing and found he could do musical things that he could not understand. Among them was a very high-pitched yodeling as he sang and the echo of his own voice. Thus the music on this record features the music Holmberg heard complete with these echoes and also some sonic delays.

Bernard Stollman claimed to have found Holmberg—guitar in hand and strumming angular chords—singing and yodeling by a fountain in Washington Square Park. A contract was offered and the rest is sort of history.

Yodeling Astrologer may never fit any category or genre of music—even that which was popular in the late 1960s. But then it was never meant to. Holmberg could not account for his inspiration either. So what is the value of releasing this record then as now? There can be no doubt that the music has psychedelic predilections. Is this even relevant today? Probably not as the current era of music has moved so far away from the use of hallucinogenic-induced mind-altering music.

However, the truth of the matter is that this is no trippy music. It is simply a plaintive cry for understanding existential angst. Remember this is the "Woodstock-era" pre-funk music. John Sebastian—meets—Country Joe and the Fish—meets—the Easy Rider. And almost all the music has a serious raison d'etre: The cry of unconditional love (not the "free love" of the so-called and often discredited hippy movement), but of love in an almost spiritual equation.

Tracks like "Grok (Martian Love Call)" and ""Romeo and Juliet" are charged with emotion and quite beautifully crafted melodically. "Lookin' Out Today" is more socially aware, but no less rich in melodic intricacy. "Never Be Free" has a crafty mid-section. And all the music, of course, features the high and lonesome sound of this unusual artist. This music is a world apart from the bluegrass of guitarist, banjoist and the late Captain Trips, Jerry Garcia, or mandolin-player and 'Old and in the Way' partner in crime, David Grisman. But it is significant stuff nevertheless. Holmberg may not be a great instrumentalist, or a great vocalist, but his music is heartfelt and quite shockingly memorable and no less relevant and fun today as it was almost 40 years ago.