By RUSSELL MOON
December 13, 2003
Sign in to view read count 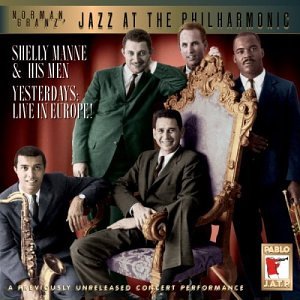 Shelly Manne took his Men on a European tour with Norman Granz's Jazz at the Philharmonic organization in the winter of 1960. Along the way, Granz recorded the quintet's February 22 (Zurich) and March 2 (Copenhagen) gigs. Manne was a Contemporary Records artist at the time; however, Fantasy Records has acquired the rights to both Granz's recordings and the Contemporary catalogue, so these dates can today be issued without record company conflict.

Fantasy has released five songs from the two dates on the all-new Yesterdays. The music is neither fancy nor adventurous – nor even particularly remarkable – merely very solid and very swinging. Yesterdays would be an excellent first bite for a youngster starting out with jazz, automatically making him the hippest kid in his homeroom... yet the music won't drive Mom and Dad to distraction.

The recordings have a bootleg sound found so often in live recordings of yesteryear. Russ Freeman's piano is undermic'd in both locations, as is the bass in Zurich. But that doesn't interfere with enjoyment of the music. For a band leader, Manne eschews the spotlight here: every track follows the formula of a sax solo followed by trumpet, then piano, then bass. The solos are relatively brief. Richie Kamuca on tenor sax is given the lead role, supported by Joe Gordon on trumpet. Gordon's tone is marvelously smooth – it's a shame he didn't record more.

The disc opens with "Cabu", which offers an exotic image. "Bags' Groove" includes the album's only lengthy solo, Monty Budwig on bass. "Poinciana" is mildly up-tempo. "Straight, No Chaser" begins with a Manne solo on drums. All songs are played in a straightforward manner without gimmicks or showmanship.

The title track is the most interesting. Kamuca plays the melody as an intro before the piano and sax solos, followed by Budwig and Manne trading fours. It is only then that Gordon joins in, this time with the trumpet providing the melody.

This music is very mainstream, owing much to Miles Davis's first quintet. Both Kamuca and Gordon have the smooth tones which earned them their reputations as being among the best West Coast jazz practitioners. Russ Freeman's touch on the piano keyboard is a little more heavy handed than other West Coast pianists, and provides balance to the group. Budwig and Manne are first rate in propelling the group forward. The group is tight, very much an ensemble. Well done.