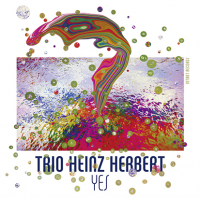 If it was an LP, the clicks and pops of the opener "J" would have the listener leaping up to the deck to examine the disc for detritus. It's a tongue-in-cheek gesture which, along with the name referencing an imaginary personage, signifies an irreverent attitude, manifest in a unashamed disregard for genre norms. The episodic cut proceeds via Mario Hänni 's jittery drums and spacey, gradually-mutating layers before the conventional instrumental signatures of Dominic Landolt's guitar strums and Ramon Landolt's undulating Satie-esque piano intermittently emerge.

At almost nine minutes, it's one of the more extended outings in a program which comprises ten largely short studio tracks, and could easily pass muster as a Sci-Fi soundtrack, albeit one which tended towards FX-laden rhythms. Nonetheless they conjure complex moods, exemplified by the simultaneously nervy and serene "Talk," which contrasts clattery drum tappiness with exchanges of glacial piano chords and chiming guitar.

The practice of composing cooperatively through rehearsal gives the music an exploratory improv-like dimension with sound collages that encompass the heavy lurching beats of "Kohäsion," the percolating slow burn of "Window For The Curious," the wistful guitar shimmer of "Loveliness" and, on "Gravity," an off-kilter tattoo which blossoms into what could pass briefly as a dance floor banger. While the results remain impossible to categorize, the trio approaches it all with contagious energy and imagination.