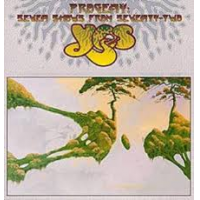 Progeny: Highlights From Seventy Two consists of ninety minutes of live recordings exhumed from Yes' 1972 tour, some of which were released as Yessongs (Atlantic, 1973). Culled from seven previously unreleased recordings of complete concerts, and sequenced to approximate a setlist of the time, this two package comes adorned in vintage Roger Dean artwork that, vivid as it is, cannot compare to the vibrancy of the music inside.

Cognoscenti may or may not agree this material constitutes Yes' holy grail as the group became ever-so-slightly more structured with the departure of original drummer Bill Bruford (to join King Crimson)and the subsequent enlistment of Alan White to fulfill that role. But the somewhat rigidified presentations of these shows belies how the vocal and instrumental expertise is catalyzed by the extraordinary self-discipline evident on "I've Seen All Good People."

There's no denying the enthralling and uplifting sensation of the latter and that force is even greater later in the show during the greater complexity of "Roundabout;" the intricacy of Steve Howe's electric guitar as it interweaves with Rick Wakeman's keyboards and Chris Squire's bass mirror the shifting textures even more graphically, all the while maintaining, and even elevating the visceral impact of the musicianship. White's comparatively simpler approach to his kit actually keeps Yes from sound too busy for the own good. In contrast, while some of the lyrics of "Siberian Khatru, " for instance, sound esoteric to a fault, the pastoral images can lend to the rapture Yes aims to create.

Still, workouts like "Heart of the Sunrise" (and even more Howe's solo "Clap"/Mood for a Day" and Wakeman's spotlight "Excerpts from The Six Wives of Henry VIII") lend themselves to the criticism of technical braggadocio, unless they're taken as pure sonic expression, but the latter the acoustic-based number adds markedly to the dynamic flow of the concert , particularly as it sets up "And You and I" where the deceptively frail sound of Jon Anderson's voice comes to the for as a major asset of the Yes sound even more so as part of the billowing group harmonies when Howe and Squire join in.

Co-producers Steve Woolard and Brian Kehew create a seamless progression of performances here from performances straddling North America including North Carolina, Nassau Long Island and Toronto Canada. In doing so the detailed clarity of the audio quality reveals " Opening" (Excerpt from "Firebird Suite") less pretension that pragmatism given the tuning enacted in the background.

Further such nuance below the surface of the most prominent components of the arrangements is worthy of selective scrutiny here, all the more remarkable given the age of the recordings (notwithstanding Yes long-standing devotion to audio quality). The unadorned mix reveals the exertion expended by the group as they play, the antithesis of antiseptic, especially played at high-volume (headphone listening doesn't offer the same insight). "Close to the Edge, " for instance, moves at a breathless pace.

A highly-distinctive 'greatest hits' set for the novice, Highlights From Seventy-Two is also available for nostalgists in the form of a of a three-LP set of vinyl, while for the completists, there's a fourteen-disc box titled Seven Shows From Seventy- Two comprising the fruits of this archiving project in their entirety. All these various configurations are but a further reflection of the multi-colored density of this music.

CD 1: Opening (Excerpt From “Firebird Suite”); Siberian Khatru. I’ve Seen All Good People. a. “Your Move b. “All Good People. Heart Of The Sunrise; Clap/Mood For A Day; And You And I: a. Cord Of Life b. Eclipse. c. The Preacher The Teacher. d. Apocalypse. CD 2: Close To The Edge: a. The Solid Time Of Change. b. Total Mass Retain. c. I Get Up I Get Down. d. Seasons Of Man; Excerpts From “The Six Wives Of Henry VIII; Roundabout; Yours Is No Disgrace.