Yes at the NYCB Theatre at Westbury 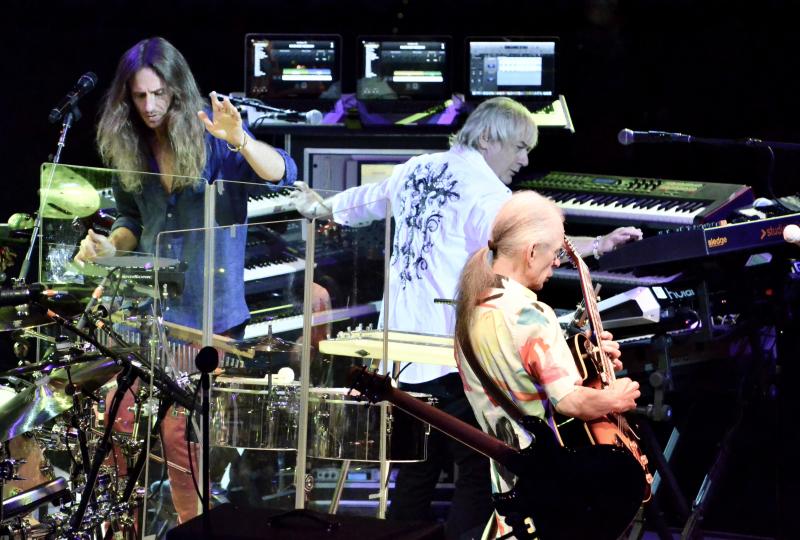 Yes is like the little engine that could. No matter what, regardless of any obstacle, the band continues to forge on. During the past (almost) 50 years, Yes has been the home to, at various times, 19 official members and another 2 touring members. Band members drift-in, drift-out, leave and eventually return. The band splits and reforms. It's a musical revolving door. It's a Phoenix that continually rises from the ashes or a cat that seems to have even more than the generally allotted nine lives. Without the help of a flowchart, it quite is difficult to detail all the personnel changes.

Yes was formed in London, England in 1968 by its late bassist Chris Squire and singer Jon Anderson. During the course of its career, the band has scored numerous Top 10 albums in either the UK or the United States. It has sold approximately 14 million albums in the United States and additional 35-40 million in the rest of the world.

The 2016 U.S. summer tour, billed as "The Album Series: Drama + Topographic 1 & 4. The "Evening With Yes" touched down in Westbury, Long Island on a sleepy, warm Saturday evening in early August. Though the band features only one very long-time member (Howe), this was by no means a "replacement Player version of the band. Downes has done two tours in Yes, spanning 8 years. He also has performed with Howe as a member of Asia. Sherwood, who replaced Squire (the late bassist was the only band member to play on all the albums), has had a lengthy career within the group. He is now in his third tour as a band member. His tenure covers 7 years. Davidson is the newby. He has only been with the band since 2012 (four and a half years) after replacing Benoit David, who served as the replacement for Anderson from 2008 until leaving in 2012 due to ill health.

The evening began with an introductory instrumental. During the piece, the band members quietly took their places. Downes settled in behind his outrageously large rig consisting of nine different keyboards and synthesizers as well as a number of laptops and a tablet. Howe and his numerous guitars took his place to the right of drummer Schellen (who did a fantastic job filling in for White). Sherwood manned his position to the left of Schellen. Of particular interest was the placement of Davidson. Many groups place the lead singer, the frontman out front. Where else would you expect to see him/her. Not so with Yes. Davidson was placed center stage but not front stage. He was surrounded by the other member of Yes, often performing while standing on a platform as the band played. This was an especially interesting site within the cozy NYCB Theatre which is famous for its revolving stage. With Yes performing "in the round" the audience was able to see each band member in a head-on fashion while Davidson sand, played acoustic guitar and handled the occasional percussion duties from the dead center of the auditorium. The band opened with "Machine Messiah," the opening number from Drama the 1980 Atlantic Records album. It flawlessly played the entire song-cycle straight through from beginning to end without a break ending with an amazing version of "Tempus Fugit." It was at this point that Howe introduced the band. During the introductions after introducing Schellen, he paused to offer White the band's wishes for a fast recovery from back surgery. The first set resumed with fantastic versions of "Time and a Word" and "Siberian Khatru." During the performance's 20 minute intermission, the band's merchandise stand was flooded by audience members. Many fans returned to their seats for the second set sporting brand new t-shirts and caps.

In short order, the venue's lights again dimmed, and the band bounded onto the stage, performing "You and I" from Close to the Edge to an enraptured crowd. They then dove head-on into the two sides of Tales from Topographic Oceans the first movement, "The Revealing Science of God: Dance of the Dawn" and the final movement "Ritual: Nous Sommes Du Soleil." Davidson voice sounded so close, so eerily similar to that of Anderson, that if one closed his or her eyes it would have been hard to tell the difference. Following the performance of side four of Tales, Yes got the multi-generational audience on its feet for a tour de force version of "Roundabout" (from em>Fragile) and a note for note perfect version of the spacey and moving "Starship Trooper" from The Yes Album (Atlantic Records, 1971). During the course of the two-and-a-half hour performance, Yes answered many questions—"Can Davidson hit all of Jon Anderson's high notes?"; "Will they sound just as good without Squire/"; "Are they really Yes?"; "Will the performance of Drama be up to snuff?"; "Can Schellen adequately replace White?" and "Can they still do it at a high level?"—with a resounding "Yes!"