Yes at the NYCB Theatre At Westbury 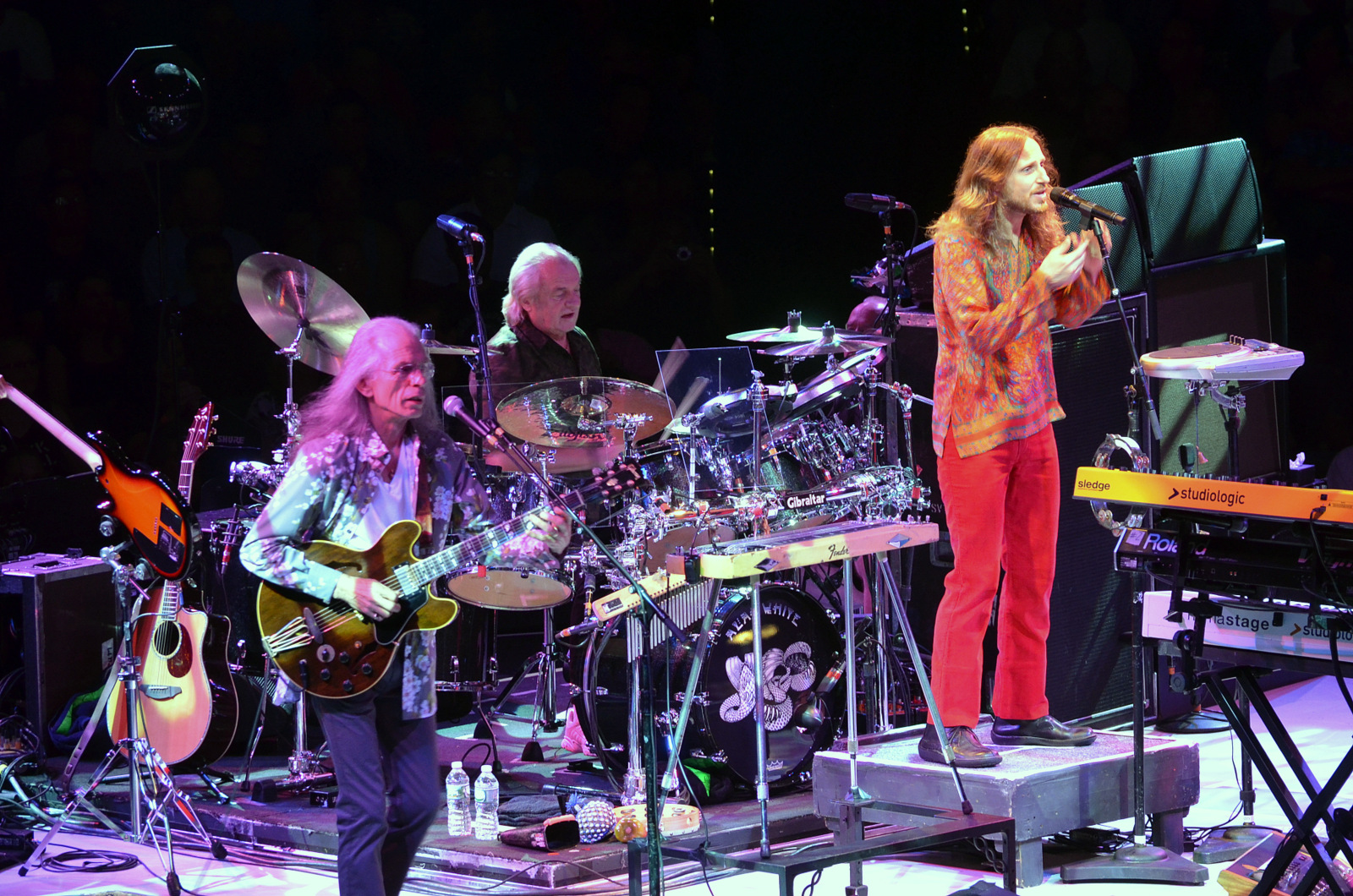 When Yes announced that it would be touring in the summer of 2014, it also stated that it would be playing its classic albums Fragile (Atlantic Records, 1971) and Close To The Edge (Atlantic Records, 1972) in their entirety, as well as excerpts from Heaven And Earth (Frontier Records, 2014) and some greatest hits selections. Quite a daunting proposition, especially considering that original lead vocalist Jon Anderson hasn't been a part of the band since 2008. In May 2008, Anderson (who was not particularly interested in recording new material with Yes) suffered an asthma attack and was diagnosed with acute respiratory failure. He was replaced as the band's lead singer by Benoît David, who toured and recorded with the band through February 2012. After contracting a respiratory illness himself, David was replaced by Glass Hammer's Jon Davison.

In the midst of its 35-city tour, the group's current lineup—Davison, alongside guitarist Steve Howe, drummer Alan White, keyboardist Geoff Downes and bassist Chris Squire—played its third New York area performance (the others being New York City, Wallingford, CT and Westbury, Long Island) in a four-night span to an audience comprised of longtime fans and, in some cases, the children of those fans. The mid-sized hall with the revolving stage was packed for this recital of Yes' two smash albums from the '70s.

One look around the arena told the fans all that they needed to know. This night would be all about the music. The stage located at dead center in the venue was set up with Downes' keyboards, White's drums, microphone stands, a single bass for Squire and Howe's guitars. Though there were a number of monitors to project pictures, album covers and ambient scenes while the music played, they were small, located above the stage and attached to the lighting rigs. The only gimmick was the rotating stage.

Yes' music is complex. Many of its songs feature complex time signatures, rhythms, syncopation and movements within extended musical passages. It can best be described as symphonic progressive rock. Though there are solos within songs and each member's playing can be classified as that of a virtuoso, the music of Yes is much more than progressive, symphonic or rock 'n' roll. It is thinking man's rock and every bit as intricate as a classical piece.

Shortly after 8pm, classical music filled with pomp and circumstance blared from the loud speakers while the small video monitors sprang to life showing a montage of video and pictures detailing the band's forty-plus year career. As the recorded music and the montage wound down, the band was led down one of the center aisles and onto the stage. Prior to the playing a single note, the group already had its first standing ovation.

The Close To The Edge album has only three songs, though the title track and "And You And I" have four and five movements, respectively. On this evening, for reasons unknown, Yes decided to play the album in reverse order, opening with a ten-plus minute version "Siberian Khatru." At its end, the crowd cheered and then erupted for "And You And I" which was followed by a twenty-minute version of "Close To The Edge." The performance of the album featured understated video montages augmented by colored and bright lights bathing the stage as musical movements twisted and turned through instrumental and vocal hills and valleys. As the stage rotated, all corners of the arena were afforded a great view of Squire's nimble fingers picking and plucking his bass lines. Guitar aficionados were treated to a birds-eye view of Howe's skillful fretwork, resulting in dazzling passages and tasty riffs.

Approximately 45 minutes into the performance, it was time for the band to address the crowd. Squire, the only remaining original member of the band, stepped forward and, with his announcement of the soon-to-come release of Heaven and Earth, the band eased its way into the new offering with "Believe Again." Davison's vocals sounded eerily how Anderson's might have and the song fit nicely into the Yes canon, with the expected multifaceted time changes, bright guitar and keys, dignified bass and drum rhythms, and an arrangement that featured both grandeur and majesty.

Fragile is credited as being the band's American breakthrough recording, reaching #4 on the Billboard charts and certified double platinum by the RIAA. Featuring the hit single "Roundabout," as well as "Long Distance Runaround" and "Heart of the Sunrise," the album has sold over two million copies in the U.S. alone.

Playing the album in its original running order, the signature opening chords of "Roundabout" sent the enthusiastic audience into a frenzy. The band provided a note-for-note perfect reading on the song, followed by "Cans and Brahms, "We Have Heaven, "South Side of the Sky" and "Five Per Cent for Nothing." Davison spent this portion of the performance delivering his vocals standing on a small platform in the center of the stage. The happy, but formerly passive crowd jumped to its feet and passionately cheered "Long Distance Runaround." "The Fish," "Mood for a Day" and "Heart Of The Sunrise" rounded out the rendering of this iconic album.

The greatest hits selections, though few, were choice. "I've Seen All Good People," "Owner Of A Lonely Heart" (with Howe looking bored, possibly because he did not play on the original 1983 Atlantic recording, 90125) and "Starship Trooper" brought the predominantly middle-aged crowd to its feet and into the aisles as they danced and cheered the band. At the end of the performance, the audience exploded in a chorus of whistles, cheers and rapturous applause as the five band members joined hands and took a collective bow.

Squire and White have each spent 40 or more years as part of Yes, while Howe—coming and going a number of times throughout the decades—has spent over 30 years of his life with the group. All in their mid-60s, their performance on this warm summer night was a revelation as they expertly and seamlessly played off of each other while performing their demanding musical landscapes.

Downes played on Drama (Atlantic, 1980) and toured with the group in support of the album, but was forced out when the group dissolved soon after, rejoining the band in 2011 and remaining the group's keyboardist ever since. His performance was strong, steady and clean as he tickled the ivories, delivering the keyboard and synthesizer passages most often created originally by Rick Wakeman.

Davison, who also played acoustic guitar, tambourine and xylophone, did a fantastic job on vocals, making the songs his own without losing the touch and timbre of Anderson's originally recorded performance. He sounded so much like Anderson that, listening with eyes closed, it was hard to tell the difference. Many audience members were heard commenting on how much they liked the singer's performance—how good he sounded and that he "hit all of Jon Anderson's high notes."