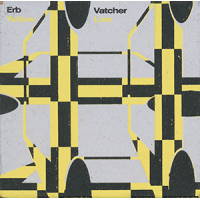 At one time a drum and saxophone encounter would always invoke comparisons with the urtext of John Coltrane's Interstellar Space (Impulse, 1974). While that is still a potent model, present day practice encompasses almost every possible mood and temperament. Swiss saxophonist Christoph Erb and formerly expatriate American drummer Michael Vatcher touch on many such wayward territories on the four cuts which make up Yellow Live, which was recorded at the Gelbes Haus (hence the color-informed titles) in Erb's hometown of Lucerne in 2016.

Vatcher's use of cadence, counterpoint and contrast keeps the improvs grounded and at least within shouting distance of the free jazz tradition. For his part Erb uses extended techniques to fashion a personal language which often evokes John Butcher in the use of reverberating overtones. A typical gambit is for Erb to pitch long tones against a choppy pulse from Vatcher. But as one of the most idiosyncratic of percussionists, recalling Tom Rainey in his ability to forge momentum from the off-kilter placement of disparate sounds and novel textures, the American ensures that there's never a hint of sameness.

In the opening "Carotin," Vatcher creates a loose swing from brushes and bass drum, which morphs into a crisply tumbling cascade against which Erb alternately snarls and snickers. Similarly conversational, "Xanthophyll" is distinguished by its restraint. It begins with Vatcher tapping and rubbing as Erb's exhalations and juddering sustains suggest a gradual stirring in the forest, with the birds and bees becoming restless. In a short but sweet change of pace to the rest of the program, "Lutein" presents Erb embarking on a gurgling rollercoaster soprano saxophone excursion. It's back to the measured exchanges in "Zeaxanthin," where at one point Erb even sounds conventionally jazzy in response to Vatcher's elastic rat-a-tat.

Together the pair make a resourceful and engaging team, and in their rich tonal-explorations uncover another slant on a now familiar format.