Year of the Mule - Gov't Mule and the Future Past

By C. MICHAEL BAILEY
March 28, 2015
Sign in to view read count
What has previously been relegated to Gov't Mule's live downloads have now been released on CD and LP. But first, a little back ground. Gov't Mule adopted a concert practice of Phish, who began (approximately) yearly coverage of a famous "classic" rock album in concert, typically on Halloween. Phish began this practice in 1994 with The Beatles' White Album (Apple, 1968).

Gov't Mule began their similar tradition on Halloween and/or New Year's Eve with a covers from singer Otis Redding's In Person at the Whiskey-a-Go-Go (Atco, 1968) on New Year's Eve, 2005. On Halloween 2007, Gov't Mule covered Led Zeppelin's Houses of the Holy (Atlantic, 1973), releasing the concert as Holy Haunted House (Self Produced, 2008).

Since then, the band has either performed concerts of mostly collected covers (particularly of the Rolling Stones) or complete albums, the most recent being The Who's Who's Next (Decca, 1971), at their Halloween concert, 2010. In 2011, finally gaining proper traction, the Mule took on Joe Cocker's albatross, Mad Dogs and Englishmen (A&M, 1970) released as Gov't Mule: Mad Mules and Englishmen (Live Downloads, 2011).

The actual concert was covered by Doug Collette in his concert review of the show, where he observes, "Though the theming of the Gov't Mule NYE nights is now customary, they've rarely picked [a classic rock album] so appropriate to the occasion." It is the most perfectly conceived and executed cover of a classic rock album by either Phish or Gov't Mule to date.

Gov't Mule has fortunately decided to free more recordings from their live downloads, offering them as discreet CDs and LPs. This is perfect marketing by the band, which is comprised of the same Baby-boomers who eat these releases with a spoon (I am such a consumer). For not just those of a "certain age" but for everyone, these recordings offer a new look at some truly important music. 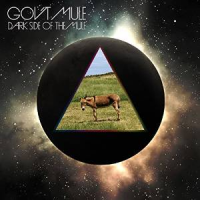 Gov't Mule
Dark Side of the Mule
Evil Teen Records
2014

A commentator on Amazon's site made the statement (paraphrased) that he could not understand why Gov't Mule stepped out of their box to cover the classic Dark Side of the Moon. Well, I say, because they have the stones to do so. Warren Haynes's voice is not the greatest for the vocals, but his instrumental sense adds a gritty dimension to the original that exposes Pink Floyd's blues underbelly. Haynes' slide guitar on "One of These Days" is a searing piece of white-hot amphetamine, goosing the adrenal glands of everyone within earshot. The band injects Aminals "Pig on the Wing" into the festivities to nice effect. "Shine on You Crazy Diamonds" is damn near perfect. I am personally glad it is the Mule playing it in this dense blues environment. Haynes pulls forth from the music its emotive core.

Of course "Comfortable Numb" must show up from The Wall as it was the only decent song from that recording. It is one of the greatest guitar songs of the last 40 years. Haynes absolutely has no business singing it. But the guitar...well, that is another kettle of fish altogether.... Separated from the encore by a couple of Mule originals is "Wish you Were Here" Which is dispatched with great aplomb. It completes a great, if imperfect, idea of recreation and nostalgia. Ther is nothing wrong with this music. Pink Floyd deserves this tribute by this band.

Rather than cover a particular Rolling Stones recording, the Mule has sprinkled their shows with Stones' classics. In many ways, the Mule is a superior interpreter of the Rolling Stones than is Phish, but ain't if great that we have both. On this Volume the Mule plays "Under My Thumb" straight while giving "Monkey Man" a slightly more refined reading. Warren Haynes' voice is adaptable to many bands, but he has an affinity for the Stones that is impressive. "Heartbreaker" is workman-like while "Paint it Black" and "Angie" are faithful to the originals. "Ventilator Blues" is full of grit and creativity and is the highlight of this release. What we have to look forward to is the reggae "Play with Fire." That is truly a musical revelation. 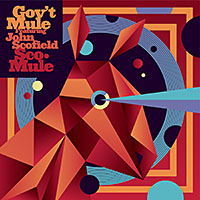 It should have been no surprise that Gov't Mule had the jazz stones to support a talent like guitarist John Scofield. The band provided Sco what MM&W could not, southern dirt, determination and authenticity. "Hottentot" sets up a diamond-hard funk groove that recalls any number of Duane Allman-Richard Betts exchanges from the golden days of southern rock. Scofield forces Haynes out of his comfort zone into a place of fecund creativity.

Scofield is unique among jazz guitarists in that he immediately embraces the jam band mentality and is able to improvise effectively for 1970s extended periods of time. The title piece, "Scomule" is the centerpiece of release, once and for all demonstrating that Gov't Mule is fully for real as a group of musicians. It is time to stop dismissing the band and a poor cover group and respect them as supreme interpreters of the Book.