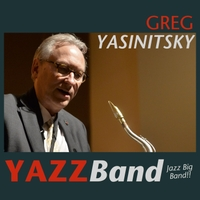 You're right, Greg Yasinitsky isn't a household name—apart from his own household, that is, and perhaps a handful of others in and around Pullman, WA, where Yasinitsky serves as professor of music and coordinator of Jazz Studies at Washington State University. And while his impressive debut album as overseer of the well-spoken YAZZ Band may not redress that shortcoming, it should at least bring Yasinitsky's music to the attention of a somewhat wider audience, which would be a win-win situation for leader and listeners alike.

Besides playing a number of wind instruments, Yasinitsky is known as a superb composer and arranger, a talent that is indispensable here, as all the YAZZ Band's songs and charts are his. The ensemble for which Yasinitsky is writing is comprised of three saxophones, two trumpets, three trombones and rhythm—in other words, a rather undersized big band—and he makes the most of every resource at hand to parallel the sound produced by larger ensembles. The band's composition is to some extent a family affair with Vern Sielert on trumpet, Vanessa Sielert on alto sax and Ann Marie Yasinitsky on flute ("New York Confidential" only).

While every one of Yasinitsky's charts is commendable, perhaps the most ambitious is the forceful and fast-moving "Partial Eclipse," as brass and winds are overdubbed with Yasinitsky personifying the reeds, Vern Sielert the trumpets, Jenny Kellogg the trombones. Yasinitsky, who solos most often on tenor, is showcased by himself on the lyrical ballad "Missing You," as is the eloquent pianist Brian Ward on the deliberative "New York Confidential." The album opens in full-bore straight-ahead mode with "Serpentine" (crisp solos by Yasinitsky, Vern Sielert and Ward), eases the tempo on "New York Confidential" and traverses four more paragons—"True North," "Sideways," "Full Blown," "Gator Tail"—before arriving at "Partial Eclipse" and "Missing You." The YAZZ Band rings down the curtain with the impulsive "One-Two-Three," on which Yasinitsky solos on alto, as he does on "Truth North," with Patrick Sheng adding robust tenor solos on both tracks and Ward anchoring the resilient rhythm section, as he does on every number.

After years of ushering students along the path to success, it's past time that Yasinitsky showed he's one teacher who can walk the walk, and he has done so in a big way using the YAZZ Band as his avenue of choice.