By GLENN ASTARITA
September 7, 2011
Sign in to view read count 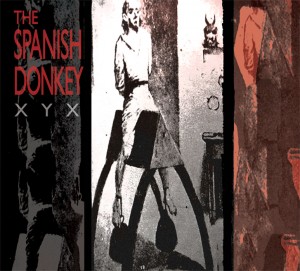 The Spanish Donkey imparts a take-no-prisoners approach with flailing electronics, bristling movements and a sonic assault that remains consistent during the two extended works of XYX. Meant to be played at a relatively high volume, this trio of prominent, modern-era improvisers/stylists adheres to a semi-controlled state of chaos, marked by doomsday theme-building exercises and polytonal noise music. It's an open-world scenario, gushing with bizarre contrasts, impressionistic dialogues and maddening opuses.

Guitarist Joe Morris renders punctilious and seething single note flurries, as keyboardist Jamie Saft streams a barrage of synth sounds throughout. However, the music is programmatic, in a loose sense due to its continuous asymmetrical pulses, largely steered by drummer Mike Pride, who intermittently stays behind the beat or shifts the unit into multilayered directions.

The program is dappled with a dour set of circumstances that includes grinding movements and cavernous landscapes. The musicians do their best to vividly convey a situation that may summon notions of a massive mechanical breakdown amid the gushing dreamscapes and splattering tonal swashes. But in several instances they throttle the flows to propagate an endless loop via a barrage of crashing drums, unorthodox phrasings, and Saft's manifold line of attack, as subliminal melodies give way to mutant passages and fragmented motifs.

XYX is a demanding listen, and requires a good deal of stamina from its audience. Even for hardcore avant-garde or free-jazz admirers, the album presents numerous challenges, especially since it's loud and seldom deviates from an extensive plane of torrential movements. Other than the dips, spikes, and occasional readjustments, the music suffers a bit from a superfluous collection of propositions. There's not a whole lot of variance when viewing the overall schematic, where notions of a musical marathon contest come to fruition.

About The Spanish Donkey