By EYAL HAREUVENI
August 7, 2008
Sign in to view read count 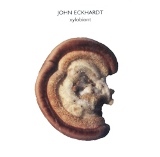 John Eckhardt's solo improvised double-bass disc, Xylobiont, is the second solo bass release on Evan Parker's Psi label, and it is as outstanding and illuminating as Adam Linson's Cut and Continuum (2006).

The Hamburg-based Eckhardt received classical training and performs regularly with renowned European 20th century, contemporary, and chamber ensembles including Klangforum Vienna, Kammerensemble Neue Musik Berlin and Ensemble Integrales. He has recorded compositions by the mystical Italian composer Giacinto Scelsi, as well as Iannis Xenakis' seminal "Therpas" for solo double-bass. He has performed Elliot Carter's "Figment III" for solo double-bass in Europe and is gifted with the excellent technique and sensibility required by the music of composers Morton Feldman and Györgi Ligeti.

Eckhardt considers himself a jazz musician, with a goal to create personal and authentic sounds from his era and culture, and to declare his interest in bass-heavy styles of club music and traditional African music. His resume notes collaborations with other remarkable improvisers such as Peter Kowald and Elliot Sharp.

The title, Xylobiont —loosely defined as "organism of wood" or "wood-dwelling organism"—suggests Eckhardt's method of improvisation. The natural, dynamic sounds of live improvisation emanating from what sounds like a live, otherworldly and timbral organism. Eckhardt's sense of invention and extended techniques are channeled into exploring the polyphonic potential of the double-bass, often by focusing obsessively with restricted areas of the instrument.

All eight unprocessed improvisations have their own nuanced identity, sometimes by implying the Giacinto Scelsi compositional method and searching for harmonic movement within a single sustained, almost microscopic sculpted sound, as heard on "back" and the more hypnotizing "bruson" and "filum." On other pieces he searches for the unique inner polyphonic timbres that emerge while touching the strings on both sides of the bridge ("mbhere") or just using the wooden part of the bow as a percussive toy ("noo bag"). The only improvisation that comes close to the familiar language of double-bassists is "TTzz," which offers an energetic extrapolation of pizzicato technique.

Throughout these fascinating improvisations Eckhardt demonstrates his deep creativity, based on serene observation and acceptance of the most obscure sounds that might emerge from his instrument. These sounds stimulate open and intuitive responses, all are valid and possible. Eckhardt's consciousness is emptied from any superficial distinctions at the actual moment of playing, resulting in joyful exuberance and an organic flow as his musical language takes over.

Eckhardt's masterful and mesmerizing performances create a sense of total immersion in this deep-toned trip.