By BEV STAPLETON
October 7, 2005
Sign in to view read count 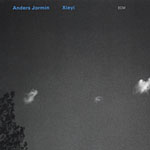 I first listened to Xieyi hard on the heels of a Grant Green Blue Note record from the early '60s. In some respects those two discs could act as markers for the vast range of music that we call "jazz" today. Where Green's music is fast-moving, blues-drenched, and driven by infectious grooves, Anders Jormin's describes small movements in a still world.

Jormin is best known for his translucent bass playing with Bobo Stenson, Tomas Stanko, and Charles Lloyd. His previous release on ECM, In Winds, In Light (with Marilyn Crispell, Lene Willemark, Karin Nelson, and Raymond Strid), was one of the most arresting releases of 2004, fusing the world of jazz improvisation with contemporary classical, church, and Nordic folk music.

Xieyi, recorded two years before In Winds, In Light, is to all intent a solo bass album. However, the music is framed by six short brass chorales that break up the disc. Sonorous and solemn, these beautiful pieces evoke thoughts of 16th Century Venetian brass music as well as the obvious parallels to ECM discs by John Surman and Kenny Wheeler.

Jormin describes his aim on the solo pieces as being to sing songs on the bass that are of significance to him. Those songs range from church hymns through Sibelius and Ornette Coleman to personal compositions and improvisations. Solo bass recordings are rare, and they run the risk of sounding one-dimensional. On Xieyi, as a result of the breadth of source material and the care taken to vary the nature of each track, Jormin has succeeded in producing a disc that holds the listener's attention throughout.

On the hymn "Giv Mig ej Glans" Jormin brings out the warmth of its essentially folk-like melody, much as Charlie Haden did with his Spanish Civil War songs. "Gracias a la Vida," with its arco technique, has quite different textures. Not for the first time on the CD, this listener is reminded of the Bach cello suites. "Och Kanske är det Natt" is a rumination on a beautiful tune by Stefan Forssen that had me wracking my brain as to where I'd heard it before. On "Tenk" Jormin uses his bass as a percussion instrument, drawing on his world music interests. The tender "Fragancia" has a gentle South American lilt. With "War Orphans," previously recorded under Bobo Stenson's leadership, bowed bass provides an intense concluding solo piece before the final brass chorale.

It has become a habit of mine, on a winter morning when the ground and trees are heavily frosted, to play Paul Bley's classic Open, to Love. Xieyi has a similar beauty, and I can see it joining the Bley in that annual ritual. In many ways the disc exemplifies what some critics dislike about ECM—but I would wholeheartedly recommend it to listeners won over to the stiller, reflective side of that wide-ranging label.