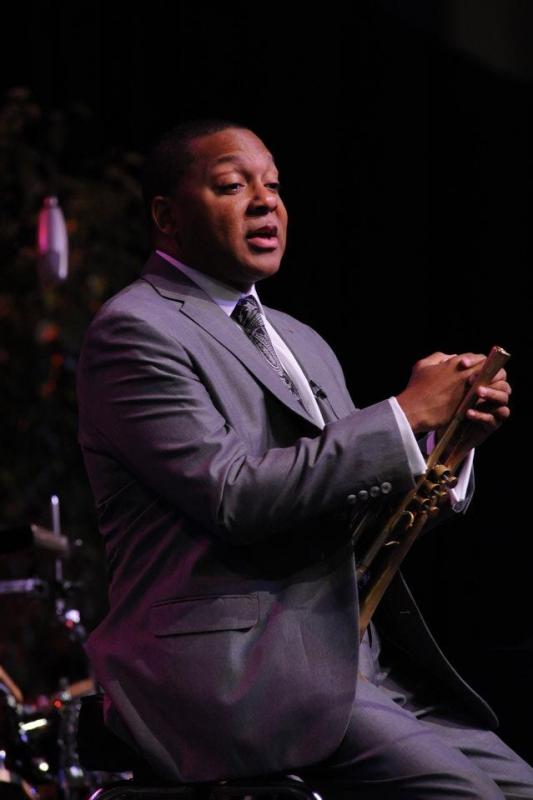 A Wynton Marsalis gig is not particularly news. But his appearance at the Bob Carpenter Center was truly newsworthy, as evidenced by the appreciative, near-capacity crowd who came out to hear his stirring fifty-minute lecture/performance. "The Ballad of the American Arts" was his intimate, yet intense presentation that encompassed arts advocacy and education, plus American political, social, and racial history and criticism—all delivered in blues and swing with a combo drawn from Marsalis' Jazz at Lincoln Center Orchestra that included drummer Ali Jackson, pianist Dan Nimmer, bassist Carlos Henriquez, trombonist Chris Crenshaw and saxophonist/clarinetist Victor Goines.

Sponsored by the University's UD Speaks program, which brings distinguished artists and intellectuals to the school, Marsalis—who recently celebrated his fiftieth birthday with a series of concerts from JALC—came to the Newark campus to address and remedy the "cultural bubonic plague" of crass commercialism, racism, anti-art policies, and hip-hop, ghetto-centric nihilism that equates "success with quality;" all of which, according to Marsalis, infects the moral, artistic and educational development of our youth.

Clad in a light gray jacket and pants, Marsalis referenced a number of American founding fathers, writers and artists, from Benjamin Franklin, Thomas Jefferson, Walt Whitman and Edgar Allan Poe (who Marsalis said "sang the blues before the blues was born"), to Mahalia Jackson, Emily Dickinson, Harriet Beecher Stowe and Buddy Bolden. Marsalis wove descriptions of all of their collective insights to show how America once supported a rich, democratic culture that enabled our founding fathers to "create a living document that could find the right tempo across the ages ... it was the Constitution that told us how to be ... but it was left to the American arts to tell you who to be; a living Constitution, "ratified in Congo Square. The Civil War sealed. The repeal of Reconstruction tested. Ellis Island cosigned. The Depression matured. Two world wars proved. The civil rights movement affirmed [and] Vietnam and Iraq sobered," through the power of American arts, and jazz specifically.

Marsalis eloquently talked about the jazz-born extensions of our democracy that flowered in the hothouse atmosphere of Minton's Playhouse in New York in the forties, where Dizzy Gillespie, Thelonious Monk and Charlie Parker gave birth to bebop. Marsalis contrasted the majesty of bop, blues and swing with the banality of rap by comparing Snoop Dogg's "Nuthin' But a G Thang" with some minstrel lyrics from the turn of the early twentieth century. Marsalis aurally augmented his views with some fine musical interludes that included a medley featuring "Dixie," "Battle Hymn of the Republic," the "Mickey Mouse Theme, " "Now's the Time," "Aunt Hagar's Blues," and "Free to Be."

During the question-and-answer period, Marsalis candidly talked about his incomplete musical education, the importance of Benny Goodman, his dialogue with baritone saxophonist Gerry Mulligan and the segregated structure of our mass media. In the end, Mr. Marsalis called for "a new American mythology" that would celebrate our affirmative, integrated heritage. "This is our story," Marsalis said. "This is our song. If well sung, it tells us who we are and where we belong."