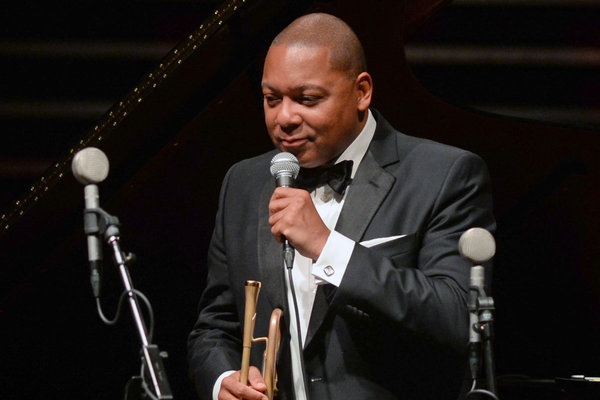 On this celebratory occasion, Wynton Marsalis became the second bona fide jazz musician (the other being Quincy Jones) to win the prestigious Marian Anderson Award given to "a show business individual who has contributed notably to American cultural, artistic, and/or charitable development." Thus, this year's Award implicitly acknowledged the role of jazz in American life, popular music, and the arts, a fact which is easily forgotten in an industry which acquires its wealth from popular music and no longer does much to advance the cause of the dedicated jazz players who are daily sustaining and creating the most advanced forms of music in our time.

Marsalis more than deserved this honor. Musically, he is a trumpet virtuoso who has fronted bands that have apprenticed numerous players into the top echelon and brought jazz to the larger listening public. He has won nine Grammys and is the first to win Grammys for both jazz and classical recordings, as well as the first jazz artist to win a Pulitzer Prize for Music. He also is a recipient of the National Medal of Arts award. He founded the Lincoln Center Jazz Orchestra and the Frederick P. Rose Hall, a state of the art performance complex, not to mention the renewed State Department Jazz Ambassador Program.

Going far beyond the duties of a musician, Marsalis has also has contributed to humanitarian work including the Children's Defense Fund, the Higher Ground Hurricane Relief Benefit Concert. and the Bring Back New Orleans Commission -the last two organized in the aftermath of Hurricane Katrina. In addition, he works tirelessly as an educator of young people and aspiring musicians. He is always giving back what he has received. Musically and personally, he carries on the tradition of the Marsalis family that is so fully connected to New Orleans, jazz, and the highest American aspirations, commitments, and purposes.

This year's Awards Concert was a magnificent achievement, one of the best crafted and well-coordinated set of talks and performances in recent memory. TV newswoman and documentarian Soledad O'Brien was a superb moderator and narrator. Mayor Michael Nutter, Anderson Board Chair Nina Tinari, corporate sponsor representatives, and government officials nimbly and succinctly honored Marsalis and articulated the purpose of the Marian Anderson Award and its community programs. Marsalis himself delivered a noble acceptance speech. The Awards dinner preceding the concert was well-populated and enjoyed by music lovers, politicos, high society, and potential donors. Much more goes into this yearly event than the average concert, and the people behind the scenes who made it happen deserve an award of their own. As a jazz musician might exclaim, "It was a gas!"

The musical performances consisted of a stunning mix of mainstream jazz, a ballet solo, gospel, rhythm and blues, and pre-Dixieland New Orleans jazz. The concert program opened with 17-year-old violinist Max Chambers, a recipient of the Anderson Young Artist Study Grant, playing a lyrical rendition of "Autumn Leaves" with colorful embellishments reminiscent of Stephane Grappelli. (Chambers is a very promising and gifted student of iconic Philadelphia jazz violinist Diane Monroe). Misty Copeland, principal dancer of American Ballet Theatre and the first African American to assume that role, performed to the music of "Misty for Marsalis," composed by Philadelphia-born Robert Garland, resident choreographer of the Dance Theatre of Harlem, with Marsalis' voice emerging in the soundtrack background.

Prominent jazz and soul/gospel singer Lalah Hathaway sang her hit song "When Your Life Was Low" ("Always remember, my friends, the world will change again") followed by "Little Ghetto Boy" a song her father Donny Hathaway recorded in 1972. Her voice was smooth, lucid, and sultry, and she beautifully improvised "sheets of sound" jazz lines in all of her vocal registers. She was followed by revered gospel singer Kim Burrell, with the hymn "Open Up the Door" leading up to a rousing, New Orleans-flavored "Highway to Heaven." At that point, a niftily-attired drum line of young people marched on stage and generated a percussive effect reminiscent of a New Orleans marching band. Hathaway then joined Burrell to provide "shout-out" versions of gospel music, with their voices working in counterpoint like two sections of a chorus. The great keyboardist, composer, and arranger Bill Jolly, his band, and Motown-style singers provided a propulsive backup for both Hathaway and Burrell.

Wynton Marsalis and his original Septet (consisting of Marsalis, saxophonists Wessell Anderson and Todd Williams, trombonist Wycliffe Gordon, bassist Reginald Vealm, pianist Marcus Roberts, and drummer Harlan Riley) rounded off the concert with three pieces in the style of early New Orleans music, with Marsalis displaying his supreme trumpet virtuosity punctuated by choruses using his fabled cup mute in the style he learned when coming up with his renowned musical family in "The Big Easy." The improvising by the group was sophisticated, rich, and with contemporary flair.

In his concluding speech accepting the Award, Marsalis paid homage to opera singer, civil rights leader, and humanitarian Marian Anderson and spoke about how her historical legacy relates to the current social, political, and cultural climate. In a succinct and powerful speech, Marsalis said slavery took the loss of the "virginity of our idealism to discover what we were willing to sacrifice for freedom, and the sacrifice was great for the entire nation." He called on everyone to uphold the legacy of freedom, education, and art, none of which, he said, were mutually exclusive: "Excellence itself is a form of protest." The speech focused on the human condition more than the music and aimed at reconciliation rather than revolution.

For this jazz journalist, the one "blue" note of the evening was the absence of contemporary jazz musicians coming on stage to perform or express their gratitude to Marsalis. Marsalis has given many jazz artists, for example Panama's greatest pianist Danilo Pérez, their first big break, and he is one of the foremost promoters, advocates, and educators of jazz, exceeded only by Louis Armstrong in that respect. Wynton, unlike his brother Branford Marsalis, is distinctly conservative in his musical tastes and somehow wandered away from progressive jazz and many of the musicians who work so devotedly to extend the music to new territory. There is something sad about this situation. Wynton is definitely a musical "brother" and should be honored that way. In a celebration of a life such as Wynton's, we would expect his cohorts to hang out with him. That didn't happen.