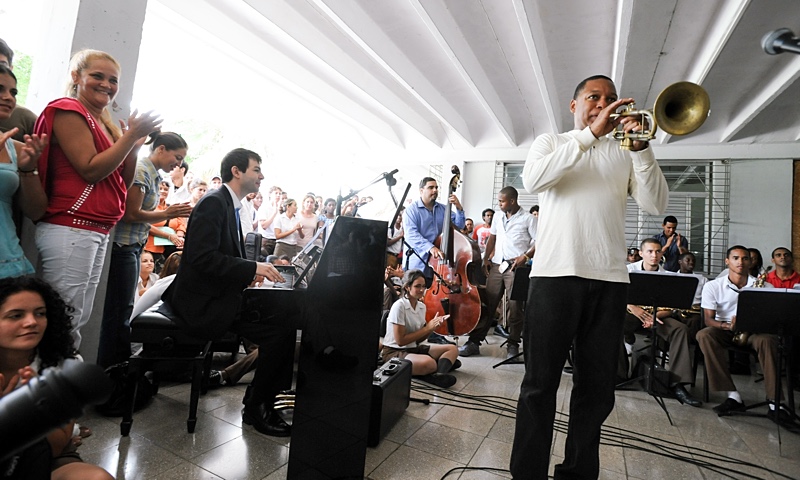 Our institution, Jazz at Lincoln Center, will go on long after I'm gone. It's not topical. It's not, 'This is what young people are doing right now.' —Wynton Marsalis

Jazz became America's popular music during the big band era, where people with ears for music and feet for dancing heard national bands, regional bands, and local bands. Musicians that became jazz stars attained that status through their individual solo statements in small windows in songs, especially when they were lucky enough to get them on recordings. Those bands never completely disappeared, but in the 1940s the tide turned and jazz musicians relished the freedom accorded them in small groups.

There became more room for experimentation and lengthy solos. The best small groups had arrangements that were elastic. The music could change quickly and often. Young musicians relished it. Each decade had their stars in in the 1980s came the player who has since become the most recognized figure in jazz. Wynton Marsalis started in with Art Blakey cohorts Herbie Hancock, Wayne Shorter, Ron Carter and Tony Williams. He roared into the public eye leading his own fiery bands filled with young players, including his saxophonist brother Branford.

But Marsalis these days says he is happiest playing with the Jazz at Lincoln Center Orchestra with Wynton Marsalis. It's more than the playing. He has always preached the gospel of jazz (controversially at times), and he is proud that JALC is a leader in education about the art form.

"I still play in small groups now and again and I like it, but I really prefer playing in a large group," he says. It's something he has always worked toward. Now he's at the top of one of the premier large jazz ensembles. He is musical and managing director and the work is arduous. But the trumpeter/composer is in his element.

The group started out playing a small series of concerts. In 1996, it blossomed into a full-fledged institutional part of Lincoln Center in New York City, with a staff and board of directors. It gets regular funding, enabling it to commission compositions, perform with regularity and sponsor many education programs. From performance grew a wide-ranging educational aspect.

"We have education programs for people of all ages," Marsalis says. "We provide all kinds of services to schools. We play in homes for the elderly and hospitals. We try to bring the music into different places and let the music be a part of people's everyday experience. We have classes that are not just for musicians. We have listening classes. All kinds of classes, to get more people involved with knowing the music."

In August, JALC began a foray into recording through Blue Engine Records.

"We're very excited about that," Marsalis says. "We have a tag line. We say: With Blue Engine, the destination is quality. It allows us to release our archives and allows our fans and the people that love our music all over the world to support us by purchasing the music and being a part of the movement of what Jazz at Lincoln Center is... Blue Engine allows us to open up our archive, which has been curated from the very beginning, and put out high-quality recordings."

The label will release new studio and live recordings as well as archival recordings from Jazz at Lincoln Center's performance history, which date back to 1987. The first was Live in Cuba, from a 2010 tour the group did in that nation. It's been followed up with The Bronx Pyramid, a small group recording led by JALC bassist Carlos Enrique.

Other initiatives include JALC webcasts, where free audio and live webcasts can be seen on Livestream and jazz.org; and a new radio product, "Jazz Night In America" (co-produced with NPR Music and WBGO); an expanding slate of video web series on JALC's YouTube channel, an a growing library of over 600 performance videos available for free through JALC's education portal, academy.jazz.org. Additional initiatives are under development.

At Blue Engine, Marsalis is happy to be working with some of the same people he worked with at SONY records when he was starting out in the 1980s.

"We worked together in our early 20s. Now they're respected and known as the best in their field. The legendary Mark Wilder masters everything. To work with Todd Whitelock and them, it's an unbelievable experience for me. We knew each other younger, and now we're going to get a chance to work on this archive and create an indelible art. This work, for them, is a labor of love. Gabrielle Armand, the head of the label at Jazz at Lincoln Center, is also a SONY person from the 90s. So there are people who've been dedicated to the music all their lives. Everybody is working to make it the best."

The orchestra continues to perform music of the greats, like Duke Ellington, Thelonious Monk, Dave Brubeck and others, while playing new music that comes from within the band. he says the concerts are well attended and he's been working with some of the same promoters for many years. "I love the people who present us in concerts. They're almost like family members, because I've seen them once or twice a year for 30 years."

"In the mid '90s, when I started to play in the big band format, I was very fortunate in that I was able to retain my audience and still play," he says. "That relationship I had initially with my audience allowed us to tour, work and make enough to survive. Now the band has a good audience."

But in spite of all his work as an educator, and the platform he has able to achieve on television and radio over the years, Marsalis is still unsettled with the state of jazz music.

"For some reason, and in our country it's inexplicable, we use our music to separate older people from younger people. It started in the 1950s. Maybe a little before that. Maybe it's a thing that has been going on since the turn of the century... For some reason we were never able to actually balance the freedom of expression and the freedom of youth with the rituals of courtship and the demands of adulthood. Once we refined it and the youth became a market, it's very hard. Until the nation matures a certain way with how it deals with younger people in relation with older people, art forms like jazz or anything like jazz that carries national implications, are going to struggle."

"I think we all have a life that's integrated. Many times we get in the marketplace and things are segregated. If you think about the life we all live, we're interfacing with things that have existed for a long time and things that are new. I have a cellphone in my hand, but I'm sitting here next to a music score with some pencils and erasers. I can go from the cell phone to the pencils and erasers with absolutely no problem... We have a very fluid life. I think jazz is a music that is very fluid. It's a music that's against segregation."

About to reach his 54th birthday, Marsalis, despite having his hands full with JALC and other projects, does not tire of or give ground on the importance of high art in the U.S.

"I don't think (jazz is) in as good a shape as it should be in, given the quality of it," he says. "I think we're one of the only cultures in the Americas that don't have a national dance where older people and younger people dance together. That's also connected to the identity of jazz... Because something sells, does not mean that it's quality. With music, once we started to connect music with light pornography, and started selling that to kids, you can't compete with that."

Very young people have no control over the music that's presented on television and other outlets. Some adults find it offensive. Other adults turn their backs.

"You're hitting them with stuff that's not appropriate for them," he said. "I'm not coming to it from a prudish standpoint. I'm coming from a very practical standpoint. Why would you give that to an 11-year old? It doesn't make sense, man. My thing is: Why? What's the advantage of giving that to them? Then the parents say, 'My parents didn't like my music, so this is what the young people are doing.' There's a psychology behind it. It's a cycle of exploitation that is unfortunate."

At JALC, "We don't separate the work of the masters. That's the foundation of what we do. But we also do a lot of new music. We have 10 arrangers in our orchestra. We're coming up with new music all the time," says Marsalis. "This is what Blue Engine is going to demonstrate—how much creativity and how many new things we come up with. But we don't feel like coming up with new things should disrespect those things that have been achieved already."

He still believes art will eventually triumph in America, even if it appears bleak now.

"It'll pass. We'll go to a higher level. But in this period of time, it's a struggle. But jazz is an art form, so it survives these things. It's not a topical issue. Our institution, Jazz at Lincoln Center, will go on long after I'm gone. It's not topical. It's not, 'This is what young people are doing right now.' Five years from now, will jazz be important? Jazz's pertinence and jazz's value is not based on public acceptance of it. It's based on the quality of music and what it represents to our country and to the character of the country and also the quality of life in the country."

JALC is one of the things that encourages him about the future.

"I'm proud of all the quality people I've had the opportunity to work with, from our board to all of our staff. It's very much a labor of love. It's very personal. We know each other. We've worked with each other for many years. We very much worked to make Jazz at Lincoln Center happen. There was no 'they.' The people who worked on it are still a very close-knit group from the board of director down. Everybody is vested in it. That's a blessing."