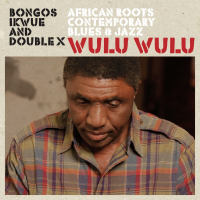 Nigeria has been a wellspring of vital African music for some time now, from ethnic folk music with its call and response, to palm-wine, juju, Afrobeat, and the horn and guitar driven sounds of highlife. This polyrhythmic music has also achieved international fame due to popular artists as Fela Kuti and King Sunny Ade. Though these two may be the best known, singer/songwriter Bongos Ikwue has attained local legend status in the Benue State of central Nigeria, since his days of Bongos &The Groovies, in the late 1960s.

Bongos Ikwue, now in his seventies, garnered an impressive performing and recording resume, took a long hiatus from music, formed a new band Double X, and is back with Wulu Wulu, his first album in decades. Though permanently tuned into his innate musical roots, Ikwue is immensely influenced by American soul, rhythm and blues, country, and Jamaican reggae, and came up with a distinctive style of Nigerian pop, singing in English and Idoma, his native language. His voice has a soothing expressive quality, effortlessly wrapping around the song, conveying imagery of the themes at hand.

The record flows lyrically and is a well-balanced eurhythmic production. The title track possesses a laidback, almost gospel feel highlighted by Omei Ikwue's soulful vocals. The subject materials cover everything from political/military conflict in "Kongo Soldier," religious disparity between Muslims and Christians in "Mustapha and Christopha," and country life in "Ochombolo," "Obide" and "Ouno." "Inale" is a soundtrack song from a film which drew rave reviews in Nigeria, and is a fable about a local slave girl. The interesting tracks sung in English are the reggae-flavored "Tell My Girl," and "How Long," which is a definitive nod to his American country and western inspiration.

The word "comeback" has been overused lately, with many artists attempting to capitalize on past glory by rehashing old tunes or simply cashing in on current nostalgia trends. This is certainly not the case with Ikwue, who offers up a solid project delivered by a tight band of professionals. Double X utilizes all of the accumulated musical amalgamation which Nigeria has to offer, sensibly blended with global flavors, to deliver the vibrant Wulu Wulu. Welcome back Bongos Ikwue.