By EYAL HAREUVENI
June 4, 2016
Sign in to view read count 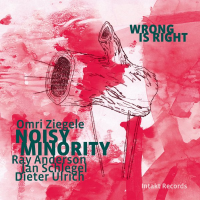 The Swiss trio Noisy Minority led by alto saxophonist-poet Omri Ziegele mocks the notion that you can make a clear-cut line between what is right and wrong in jazz or any improvised music. Their aesthetic goes deeper than the often-repeated inverse by pianist Kenny Barron: "if you don't make mistakes, you don't play jazz." Instead, Noisy Minority adopts Italian philosopher Alessandro Bertinetto argument that jazz is not an aesthetic of imperfection but a "perfection of the moment."

These academic arguments lose their importance the moment start listening to Wrong is Right, featuring the Noisy Minority augmented by veteran downtown New York trombonist Ray Anderson. You may find yourself surrendering to the telepathic interplay of the Noisy Minority trio—featuring electric bassist Jan Schlegel and drummer Dieter Ulrich, working together since 1995, but releasing only one album as a trio before, First silence (Intakt, 2001). This trio never gives routine a chance, recklessly pushes its envelope, taking risks and nonchalantly incorporating highly personal sonic stew ingredients of funk, noise and punk.

Noisy Minority played with Anderson in New York in 2012 and all four musicians reconvened again in Zurich in 2015, performing the Wrong is Right material about two dozen times before recording it in a one-day studio session. Ziegele new compositions explore the immediate rapport between him and Anderson. These compositions explore their urgent, conversational interplay, the manner that both build the tension, often with a sharp sense of humor, fuse it lit and explode in commanding solos. Schlegel and Ulrich charge this tight and expressive interplay with wise, fast shifting pulses.

Ziegele spoken-word poem "Where I'm Going To" emphasizes the expansive and intelligent sonic universe that the quartet has developed. Noisy Minority plus Anderson interplay embraces immediate, rough energy, hard-driving rhythm, eccentric sounding solos, free-improvised noisy searches and and intriguing Beat poetry wisdom. The title piece sound is an ironic, swinging exploration of a prog rock rhythmic module. The longest piece, the 14-minutes "Tolck" opens the interplay to the most wild ideas and spontaneously improvised, highly personal language of Ziegele and Anderson. This piece enables both to create the most eccentric and busy conversation, occasionally disturbed by noisy, fractured pulse of Schlegel and Ulrich. Warmly recommended.

Late Cats’ Rushing Hour; Where I’m Going To; Faster than the Master; Finally Your Own Voice; Decimal System; Wrong Is Right; Tolck; In the Old Ways.