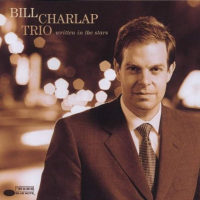 After a decade of accompanying some of the world's best-known jazz vocalists and instrumentalists, pianist Bill Charlap is stepping forth, front and center, to claim his well-deserved recognition as a pianist with melodic expressiveness and straightforward appeal. While Charlap performed in Gerry Mulligan's, Phil Woods' and Clark Terry's groups, it's easier to imagine him accompanying singers like Carol Sloane, Tony Bennett or Sheila Jordan. Bill Charlap approaches a tune in the same way that a singer unfolds a song—little by little with tinges of joy and sadness and with discrete dramatic moments that connect with the listener.

Charlap's understated story-telling approach must derive from his upbringing by Broadway composer Moose Charlap ("Peter Pan") and singer Sandy Stewart ("My Coloring Book"). Fully appreciating the nuances of the American songbook, Charlap chooses to include the under-recorded choruses of the tunes, and his improvisations consist of embellishments of the ever-present, even though unstated, lyrics.

Even though Charlap previously recorded with his present trio, Written In The Stars represents his first big-time release, complete with promotional events ranging from this month's week-long appearance at The Village Vanguard, interviews, tours of the major festivals and airplay galore.

The two unrelated Washingtons on the album, Peter and Kenny, establish an ease and interplay that animate the tunes not through flash but through understatement. Listen to Harold Arlen's "It Was Written In The Stars," and it becomes evident that Peter Washington creates a slight tension with a pedal point as Charlap's chord changes shift, though rooted. Or "Blue Skies" begins with the seldom-heard chorus, perhaps puzzling the listener with its vague suggestion of the song to follow as well as its final tempo—which happens to be an unostentatious, lively romp. "Where Or When" evolves into a swaying waltz enlivened by Kenny Washington's steadfast foundation created from lightly tapped cymbals with a snare rim accent on the second beat.

More in the elegant tradition of Tommy Flanagan than the variegated unpredictability of a Kenny Barron, more in the lyrical style of Jimmy Rowles than in the smoldering fire of a McCoy Tyner, Charlap reveals the natural, sophisticated extroversion of standards—through the controlled, fast-paced swing of "Slow Boat To China" or through the unaccompanied reflectiveness of "I'll Never Go There Anymore." Appropriately enough, "I'll Never Go There Anymore" was written by Eddie Lawrence...and Moose Charlap.

In The Still Of The Night, Dream, The Man That Got Away, Blue Skies, Where Have You Been?, Where Or When, On a Slowboat To China, One For My Baby, I'll Never Go There Anymore, Lorelei, It Was Written In The Stars