Barbara Fasano: Written In The Stars 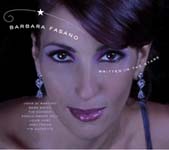 Singer Barbara Fasano is the real deal! In a perfect world, if this was forty years ago, Fasano could have been a world-class pop singer/star on par with Streisand.

Does this sound far-fetched? It's not, if you consider that Streisand's eponymous album (in 1963) was comprised of tunes largely from Broadway and the Great American Songbook; and that The Second Barbra Streisand Album, released during that same year, consisted of the same pattern, with five of the eleven tracks by Harold Arlen. Consider what your own reaction was back then to the Streisand versions of "Right as the Rain," "Anyplace I Hang My Hat Is Home," "Down With Love" and "When The Sun Comes Out."

Barbara Fasano's third album, Written In The Stars is, coincidentally, a tribute to the music of Harold Arlen, and it is just as important a work as the aforementioned 1963 recordings. I've recently seen Fasano's live performance of some of this same material within the framework of her Two For The Road cabaret concert with husband Eric Comstock. While the witty and urbane spoken word portion of that event is not included on this album, the beauty of the Arlen songs and the breathlessness of Fasano's beautiful singing comes fully through.

While several of the Arlen songs are well known, like "Come Rain Or Come Shine," "One For My Baby" and "Blues In the Night," most of these fifteen selections range from the obscure to the underappreciated. Fasano is a natural romantic interpreter of the Great American Songbook, and her versions of such ballads as "Here's What I'm Here For," "Last Night When We Were Young," "I Wonder What's Become Of Me" and "Don't Like Goodbyes" are among her best. When she performs a downtempo version of "This Time The Dream's On Me," all of the yearning described within the Johnny Mercer lyrics, which presumedly comes from a 1940s environment, comes pouring out.

Barbara Fasano's musical forte is cabaret music, yet the album is fashioned with a jazz sensibility. The ensemble is led by pianist/arranger John DiMartino, and it includes bassist Sean Smith (who was the third musician present at the above mentioned Fasano-Comstock Show), tenor and soprano player Joel Frahm, trumpet/flugelhorn player Tim Ouimette, guitarist John Hart and drummer Tim Horner. Eric Comstock joins Fasano on a light-hearted duet version of "As Long As I Live." The shading and solo opportunities from DiMartino, Frahm, Ouimette and Hart serve to make this a far more jazz-related album.

Each musical genre has examples of albums that demand repeated listening and appreciation. In terms of the Great American Songbook, this is one of them!

It Was Written In The Stars; Let's Fall In Love; Here's What I'm Here For; Blues In The Night/I Wonder What Became Of Me; Between The Devil And The Deep Blue Sea; Don't Like Goodbyes; As Long As I Live; I Had A Love Once; This Time The Dream's On Me; The Eagle And Me; When The Sun Comes Out; My Shining Hour; Last Night When We Were Young; Come Rain Or Come Shine; One For My Baby.