Scotty Alan: Wreck And The Mess

By DOUG COLLETTE
January 24, 2012
Sign in to view read count 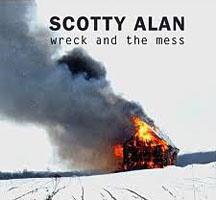 The antique sound quality of Scotty Alan's Wreck and the Mess suits the rootsy sound of this guitarist/vocalist's music, as the raggedy dynamic of the opening "Goodbye" suggests he and his accompanists are just barely keeping it together as they play. Still, their precarious interaction is one of the most joyous of musical sensations, the sound of a band discovering its bond with each other and its material.

As "Your Hero?" unfolds, a distinctly ironic air emanates from Alan as he sings of times gone by with a knowing tone and a weathered voice that belies his youthful optimism. Meanwhile, the drumbeat behind him resonates like an accusatory finger point and the guitar solo reeks of "I told you so." Bob Dylan at his invective best would be proud—and not just of the attitude: the spontaneity of the arrangements and the playing catches the musicians, again, at the very point where they understand the material in both conception and execution. The tracks are as terse and to the point as songs such as "Was It Ever?"

Self-knowledge pervades songs such as "Long Way From Laughin.'" Alan's steady presence sets the tone for tracks as upbeat as "Ain't Much" as well as mid-tempo material like "Dam." Through both those cuts and elsewhere, his inclination to confront his circumstances is refreshing, instead turning potential self-pity like that within "Sinkin' In" and "Someone to Fight" into statements of resolute purpose.

The repetitive refrain of 'I feel alive!' on "Says Lately" begs to be taken at face value though; Alan is nothing if not to the point when he wants to be and his courage is as wry as it is good-natured when he sings on "Down Before I Fall." Such emotional resonance permeates the musicianship on Wreck and The Mess, the personage of which includes string-instrument wizard David Lindley as well as Fear of Faces keyboardist Ian McLagan.

Neil Young's regular collaborator, mix-master Niko Bolas, contributes to the recorded sound in no small measure, too. The deceptive clarity of the mix thus becomes a reflection of the artist's own personality. And, just as there's more to Alan than meets the eye, there's more to tracks like "Barn Dance" than meets the ear: Kristin Mooney's harmony vocals recall the best moments of Nicolette Larson accompanying the Canadian rock icon, or Emmylou Harris' stint with The Bard of Minnesota.

The alt-country movement spawned by Uncle Tupelo morphed into a much more polite (and self-consciously sensitive) genre termed "Americana," but Alan resides squarely in that earlier mindset. He's less inclined to wallow in his feelings than engage in healthy expression, and by the time it's over, Wreck and the Mess sounds like nothing so much as a complete and utter exorcism of demons.

Good-Bye; Your Hero?; Long Ways From Laughin'; Ain't Much; Dam; Says Lately; Barn Dance; Not Ready To Be; Down Before I Fall; Do It Alone; Was It Ever?; So Loud; Dusty Hollow; Sinkin' In; Someone to Fight.