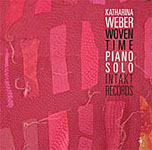 Until she'd reached the age of seventeen, pianist Weber hadn't played the piano without having sheet music in front of her, but it's clear from this program that she's put in the effort it takes to acquire the improviser's gifts. Such, however, are the recorded precedents for solo improvising pianists that the business of staking out individual territory within the recorded canon is fraught.

In that regard, Weber fares rather well. The extraordinary reflection of "Sicht aus dem Kopfstand" is entirely her own, and she has a way of seemingly distilling time which ought to be the envy of others. The piece is less than four minutes duration, but in this case the brevity serves the music well.

That's equally true generally speaking as well. "Gefalschte Obertone und die Wahrheit dahinter," at just over three minutes, is static, seemingly not permissive of development, but in a way that conjures forth no notions apart from that of Weber's singular musical personality—certainly Morton Feldman's brand of minimalism isn't evoked.

Cecil Taylor's spirit isn't walking the floor here either. On "Dialog mit dem Hausgest" Weber gets as close as she ever does to his hyperactivity but the teasing out of lines, and indeed, perhaps, expectations, is the sound of a pianist only too aware of his precedent. As it is, she reaches a happy accommodation with it, letting her own music breathe in its own singular way.

She's a musician who tends to shy away from the emphatic, which in its way also informs her musical personality. She gets as close to such a gesture as she ever does here on "Quint-Essenz" where her innate pianistic knowledge allows her to tellingly deploy the instrument's dynamics. Again the risks of meandering are denied by brevity and the result is that her ideas come across as distillations, symbolic not so much of caution as they are of restraint of a high order.

"Schuttelbecher" is almost mechanical in its nature, and not least because Weber's hands serve almost as a kind of surrogate player-piano, complete with the connotations of the static that this implies. In view of this, it's perhaps unsurprising that the music doesn't progress in a linear fashion but instead seems to hang in the air, subject not so much to passing whim as to when Weber judges the moment is right. Her right hand teases a figure out towards the piece's end, but without compromising the mood established.