Skuggorna Och Ljuset: Would Fall from the Sky, Would Wither and Die 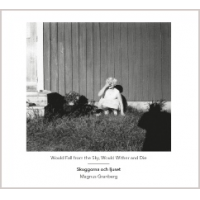 If the Swedish group name Skuggorna Och Ljuset does not ring any bells, then the names of some of its members may help jog the memory—Magnus Granberg on clarinet, Anna Lindal on violin, Leo Svensson Sander on cello, Erik Carlsson on percussion. Yes? Well, all four of them have previously figured on Another Timbre releases as members of the larger ensemble Skogen, in particular playing the Granberg compositions "Ist gefallen in den Schnee" and "Despairs Had Governed Me Too Long" .

Where Skogen included nine or ten members, Skuggorna Och Ljuset (translates as "Shadows and Light") is a quintet. In addition to the four from Skogen, prepared pianist Kristine Scholz is also a member. Her presence is required as Granberg here just plays clarinet rather than also playing piano as he did before in Skogen. Another consequence of the shift from nine or ten members down to five is that the electronics that were a feature of Skogen (played by Toshimaru Nakamura) are absent. Hence, the soundscape here is radically different to Skogen's, being rather more akin to that of a chamber group—well, a chamber group with a percussionist, actually...

As with his two compositions mentioned above, for "Would Fall from the Sky, Would Wither and Die" Granberg reworked harmonic material from another composition. Whereas the previous two used harmonic material from classical pieces by Schubert and John Dowland, this composition draws on the thirties pop song "If I Should Lose You"—in fact, did you spot that the title selectively quotes from its lyrics? As before, Granberg has transformed the "borrowed" harmonic material enough that his composition is not remotely reminiscent of its source. So, "Would Fall from the Sky, Would Wither and Die" is taken at a relatively even, deliberate pace that is far removed from barnstorming versions of "If I Should Lose You" such as Sinatra's. That lack of bravado or bombast is one of the appealing qualities of Granberg's music, one which gives it a relaxed, tranquil mood that is easy on the ear.

In some ways, the presence of only five players contributes to that mood, giving each of them more time and space to play so that notes are held and can be savoured for longer. The other side of that coin is that some listeners who are accustomed to Skogen's readings of Granberg pieces may find Skuggorna Och Ljuset too sparse by comparison. Such listeners would be well advised to persist with the smaller group, as its playing is certainly different to Skogen's but ultimately just as appealing and satisfying. Would Fall from the Sky, Would Wither and Die continues Granberg's winning streak on Another Timbre.

Would Fall from the Sky, Would Wither and Die.

Title: Would Fall from the Sky, Would Wither and Die | Year Released: 2015 | Record Label: Another Timbre