By BRUCE LINDSAY
December 20, 2012
Sign in to view read count 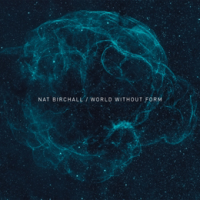 In a world that often seems bereft of any sense of spirituality it's good to know that performers like saxophonist Nat Birchall are still true to the spirituality of music. Birchall, based in the northeast of England, continues to create beautiful, soulful, music on his fifth album as leader, World Without Form, in the company of some of the UK's finest young players.

Birchall's avowed love of John Coltrane and Pharoah Sanders remains clear in his playing, such as his lovely tenor intros to "Dream Of Eden" and "Divine Harmony," and in his use of percussion. His love of reggae is far less to the fore musically, although some of the titles of his original compositions have echoes of 1970s roots reggae, while the title of the truly spectacular "The Black Ark" may well be a tribute to Lee "Scratch" Perry's famed studio.

The band lineup is similar to that on Birchall's Sacred Dimension (Gondwana Records, 2011). However, harpist Rachael Gladwin is missing this time round while drummer Paul Hession and bassist Jon Thorne step in. The absence of Gladwin's bright, crystalline harp is particularly noticeable when Birchall plays tenor saxophone—it offered an additional tonal quality to the music, a contrast to Birchall's soft tenor tone rather than the more complementary sound of Corey Mwamba's warm, relaxed vibes or pianist Adam Fairhall's flowing phrases. The change is less marked on tunes such as the swift, mystical, "Return To Ithaca," when Birchall plays soprano, giving his sound a sharper edge.

The sound is bolstered by the addition of second percussionist Andy Hay on five tracks, while on three of these tunes there's a further boost from Thorne as a second bassist. Doubling up bass and drums gives a "wall of sound" feel to the music but, as "The Black Ark" exemplifies, never overwhelms the melodies. Nick Blacka and Thorne set up a deep, rich, bass rhythm while the percussionists create a groove which is relaxed yet full of forward movement. Birchall (on tenor), Mwamba and Fairhall all use this foundation as a basis for crafting rather fine solos, full of lyricism and positivity.

There's a consistency of approach across Birchall's albums, but the variations in instrumentation and musicians, though relatively slight, ensure that each release bears its own personality. World Without Form's calming and uplifting music is a welcome addition to Birchall's discography, one of the most distinctive in contemporary British jazz.

World Without Form; The Black Ark; Dream Of Eden; Divine Harmony; Speak To Us Of Love; Return To Ithaca; Principle Of Beauty.