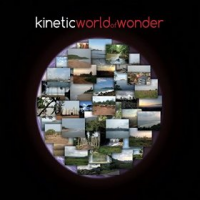 Opening with the energetic "World of Wonder," the secret weapon of this band is clearly Anqwenique Wingfield. Her pellucid vocalisation is used to great effect and double-tracked on this number to provide harmonies. The piece eventually moves into an exciting accelerando coda, gradually fading out amidst energetic percussion.

Presenting contrasting reflective moods, ballads such as "Waiting for Giving" and "My Everything" demonstrate that Wingfield's vocals can carry these often sinuous melodies with consummate ease and flair -check out her breathtaking sustained note ending to "Then." With mid-tempo numbers such as "Proverb" and "Bless This Day," the West African influences seem to simultaneously embrace South American ones too, with shades of early Return to Forever featuring Flora Purim.

The African percussive vibe returns on the lively instrumental "Dancing Chicken" as the RTF similarity re-emerges once more, replete with tempo changes, growling bass and a lengthy guitar solo. The album closes with "Will Not Forget," Wingfield's silky vocals punctuated by a short stinging guitar solo and tight percussion breaks. Whilst there clearly are some influences heard here (and what record isn't influenced by something or someone?), this is anything but a derivative album. Sheehan's captivating and intelligent compositions ensure that they exude their own originality and vibrancy, culminating in a very satisfying project indeed.

World of Wonder; Waiting for Giving; Proverb; My Everything; Show Me; Bless This Day; Dancing Chicken; Then; Will Not Forget.