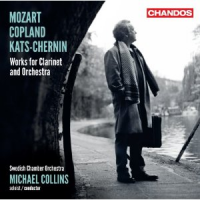 English clarinetist Michael Collins is no stranger to Mozart's lone clarinet concerto, having provided Gramophone Magazine its critical selection of the same for several years in Clarinet Concertos: Mozart—Beethoven (Deutsche Grammophon, 2000), with Mikhail Pletnev and the Russian National Orchestra (since unseated by equally fine performance on the 2010 Hyperion release from Thea King and the English Chamber Orchestra under the direction of Jeffrey Tate). Collins now emerges as a gifted soloist and conductor on Works for Clarinet and Orchestra. Collins directs the Swedish Chamber Orchestra, with whom he recorded his well-received Spohr concertos, in a survey of Mozart's concerto coupled with that of Aaron Copland and the contemporary Australian composer Elena Kats-Chernin's "Ornamental Air," for basset clarinet and orchestra.

Collins (playing the prescribed basset clarinet) keeps his Mozart brisk but unhurried. His tone is sharp as citrus and precise as a timepiece. His modulations in the Allegro are fluid and sumptuous, characteristics telegraphed to the bright "Rondo. Allegro." The modern instrument Swedish Chamber Orchestra was well-primed for the concerto, responding to Collins' gentle direction and capturing the composer's pathos and ethos in the performance. Mozart was experiencing his final illness while composing the concerto for his friend, virtuoso Anton Stadler, and Collins manages to capture the mixed emotions of the music, particularly in the famous Adagio," which is played slowly and with majesty.

Collins' Copland is pastoral, with equal parts brains, brawn, and emotion. His tone is dryer than on the Mozart, an aural vision of a New England autumn. The concerto's second movement is modernism beyond Late Romantic, with Copland's trademark American touches. As if in a continuum, the premiere recording of Elena Kats-Chernin's "Orchestral Air" brings the state of clarinet performance into the now, at once looking back at a jazz and classical landscape while progressing forward into the new. The piece reveals sharp dynamics and plenty of complex drama. Collins sounds more than comfortable with the contemporary piece, capturing its whimsy and imagination.

Mozart: Clarinet Concerto, KV 622 in A Major; Copland: Concerto for Clarinet and String Orchestra, with Harp and Piano; Kats-Chernin: Ornamental Air for Basset Horn and Orchestra.