By EYAL HAREUVENI
September 20, 2013
Sign in to view read count 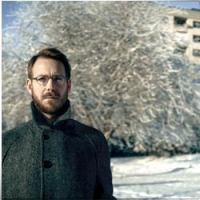 Works is the first album containing compositions by Swedish trumpeter Emil Strandberg. But this is also a highly collaborative work. The set of subtle and nuanced compositions for a chamber, acoustic trio stress an intimate dialog between the three musicians. The musical expression is equal to sensitive listening and always examines its own formulation, its sound, its timbral qualities, and how it resounds.

Strandberg collaborates here with two like-minded musicians—acoustic guitarist David Stackenäs with whom he plays in the American-Swedish band Seval—and double bassist Pär-Ola Landin, member of another trio of Strandberg. The sound of the trio is subtle, and relaxed. Strandberg in particular plays simple straight-forward lines, mostly with no vibrato, avoiding consciously the option of becoming a style, but with an elegant presence and authority. This open interplay turns each of the eight short compositions into detailed narratives. Each musician adds another perspective, color, or timbral fragment to the abstract story, collectively solidifying its outline.

The compositions progress like conversations, gaining more information, depth, and insights. The interplay is always balanced, contemplative, and restrained but still exposes the emotional turmoil that the music points to. In some of the compositions, as on "Sthlm Stomp" and "They Hear No Music," the improvised elements are more apparent but often the compositional themes are used as a vehicle for improvisation.

This is an impressive set of gentle compositions that draw a nuanced musical map of quiet, emotional storms.

Maybe It Is; Changes; Singer in the Park; Sthlm Stomp; Walker in the Rain; 127; They Hear No Music; Komposition.