By BRUCE LINDSAY
December 2, 2012
Sign in to view read count 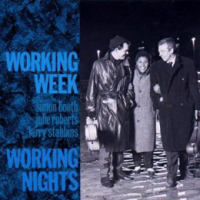 Many contemporary music and cultural commentators disparage the UK's '80s pop scene as a time seemingly in thrall to new technologies, and whose throwaway commercial hits are long forgotten—and rightly so. Is that really how it was though? Others look far more fondly on the decade's music, remembering its brief dalliance between pop culture and jazz with affection. This is, after all, the decade which saw the emergence of Loose Tubes, saxophonist Courtney Pine and Working Week—and which put those acts on primetime television. This comprehensively annotated and extended rerelease of Working Week's debut, Working Nights (originally released in 1985 on Virgin Records), is a happy reminder of the best of those times.

Working Week was the brainchild of guitarist Simon Booth and saxophonist Larry Stabbins, who worked together in Booth's previous band, Weekend. Stabbins was also a leading light on the European improvised music scene. Julie (now Juliet) Roberts joined them for this album, adding her soul singer's power and sensibility. Stabbins and Booth wrote most of the songs, skillfully matching killer grooves and memorable melodies with lyrics that drew on political inspirations (Booth's "Venceremos" was dedicated to the Chilean singer and activist Victor Jara) as well as the familiar theme of loves lost.

The original vinyl release consisted of the first eight tracks on this reissue; a set of tunes that still sounds sharp and exciting almost 30 years after its release. The additional tracks—a mix of alternative versions, live recordings and remixes—are no mere fillers. The extensive list of guest musicians and singers is a veritable who's who of the best, most forward-looking, performers of the time, such as trumpeters Guy Barker and Harry Beckett, saxophonist Chris Biscoe, trombonist Annie Whitehead and drummer Louis Moholo-Moholo.

These players add a real spark to the music: Dave Bitelli's clarinet on "Venceremos" heightens the song's intensity; Whitehead's powerful, raw solo energizes "No Cure, No Pay"; while Beckett adds his own fiery solo to the same track. Stabbins is also an emphatic presence on the frontline, showing his technical and emotional range with a soprano sax solo on "Autumn Boy" and tenor solo on Marvin Gaye's "Inner City Blues."

The guest vocalists are also stellar. Tracey Thorn, of Everything But The Girl, and Robert Wyatt duet on all three versions of "Venceremos (We Will Win)," while Julie Tippetts leads on "Storm Of Light." These three voices have their own soulfulness, a contrast to Roberts' more raw-edged sound but still full of emotion and commitment. There's also a fluid, intense rap from The Last Poets' Jalal on "Stella Marina."

Working Week's central trio remains active: Booth, now under his original surname of Emmerson, formed the Afro-Celt Sound System and leads The Imagined Village; Roberts is one of the UK's best singers, working in the jazz and dance scenes; and Stabbins leads the excellent Stonephace. The superb Working Nights is a testament to their early talents.