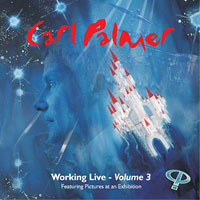 Volume 3 represents the third chapter of celebrated drummer Carl Palmer's reinventions of past group works, including Emerson, Lake & Palmer (ELP). His technical gifts are legendary, and with this live recording, the drummer instills a distant relative viewpoint of routes previously traversed.