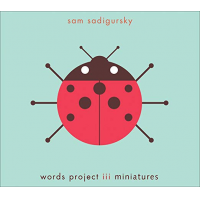 There is something of genius in Sam Sadigursky's musical poeticizing. Indeed, besides his knack for casting the most uncanny yet perfect voices for his eclectic and at times Kafka-esque sets, the Brooklyn-based reedman/composer is rapidly becoming the beacon of modern jazz-informed musical prosody. In this capacity, he replenishes the dormant format with a daring, integrated approach to composition, cadence and arranging, while remaining creatively respectful towards the texts he sets to music. As unsettling as some of his arrangements may be, he always finds imaginative ways to put his writers' verses in an enhancive, albeit at times wry, light.

Though the second installment of his ongoing Words Project, Words Project II (New Amsterdam, 2008), proved somewhat disappointing, Sadigursky returns with a batch of incantations as gripping as the project's acclaimed first effort, Words Project (New Amsterdam, 2007). While this first outing firmly established him as a commendable talent right out of the gate, with Miniatures he reaches a new level of formal mastery, using the contrapuntal aspect of his compositional trade more fruitfully and somewhat more prominently.

On the opening "Content," Sadigursky's treatment of David Ignatow's thought-phrase gets a mechanistic, clock-like working, as each of its syntactical propositions get isolated and repeated ad infinitum by Monika Heidelmann's overdubbed vocals, but with each line's exposition deployed through its own set of rhythmic permutations. In both its design and effect, it is reminiscent of the medieval motet. Fernando Pessoa's "Recall" takes a similarly clever, though more fugal spin. Other pieces in the program also showcase Sadigursky's sure skill as an arranger/orchestrator, namely the tranquil wind arrangement of "Wistful," the string quartet-adorned "Now," and the monosyllabic chorale "Do Me That Love."

But the real ear-opening moment comes in Christine Correa's performance of Maxim Gorky's scornful screed against jazz, "O Muzike Tolstykh." The assembling of the overly expressive vocalist—who takes a serious joy digging in each of the Bolshevik author's cutting descriptions—and Sadigursky's cohorts' dissonant machinations lends to one memorable moment. The sonorous commentary is followed by the group's dense construct around Alena Syknkova's "Tears," akin to listening to Björk in the middle of a noisy New York City traffic jam. Conversely, Maureen MacLane's "Ode" gently rolls off the tongue of violinist Roland Satterwhite's soft, rickety voice, which is stealthily supported by Michael Beers' English horn and the leader on piano. "To Know Silence Perfectly," a dreamy, almost psychedelic ditty, also adds to the other, more introspective vignettes.

Miniatures is an engaging, richly textured work to be reckoned with, a modern masterpiece of the profoundest authenticity.