By MARTIN GLADU
September 20, 2008
Sign in to view read count 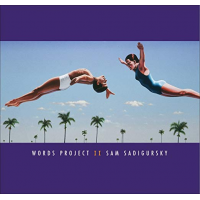 "On the dark and difficult path you have chosen, you sometimes lose your way." As if by premonition, the opening phrase from New York City-based reedman/composer Sam Sadigursky's Words Project II not only summarizes its leader's against-the-grain approach, but the album's less conclusive result than the initial The Words Project (New Amsterdam, 2007). In the first installment, selected texts from Mark Boog, Osip Mandelshtam and Sylvia Plath offered glimpses of his penchant for putting listeners ill-at-ease and confronting them with uncomfortable manifests. But, that being said, the off-putting effect that resulted was somehow rounded out/diluted in the more poetic and optimistic program than in the present.

This time, a clear shift towards the pungent prose of such controversial figures as activists Andrew Boyd and Audre Lorde, as well as narratives pertaining to hotly debated political issues, have basically supplanted the luminous metaphoric imagery of Czeslaw Milosz and Paul Auster's skilled wordsmithery that truly enriched the precedent Project. Another novelty is the use of writings originating from alternative media such as blogs. Even a transcription of a young beauty pageant contestant's baffled balderdash somehow makes its way onto tape.

With three of its texts drawn from Boyd's book Daily Afflictions (W.W. Norton and Company, 2002) - a compilation of musings phrased in the second person—the author/agitator's rather questionable rhetoric afflicts the album of a pessimistic aura. Rosy reverie is clearly not relished here. As striking is David Ignatow's "No Theory," a verse whose intention appears to be of casting doubt around dogmas, beliefs, axioms, theories, paradigms, etc. through an obtrusively repulsive description of poultry remnants. Surprisingly, soft-voiced Becca Stevens comes out as charismatic as ever despite the graphic, gore-ish description of the said animal's insides. In fact, besides Sadigursky's obvious melodic writing and arranging talents, Stevens' inviting and penetrating chanting proves an oasis in such modernly edgy protrusions.

Dunya Mikhail's Guernica-reminiscent commentary "The War Works Hard," a lengthy piece on the atrocities of war she narrates herself atop screechy sirens and other chaotic sound bites, is equally disturbing and as matter-of-fact. Besides Stevens, Monika Heidemann's Bjork-influenced singing and newcomer Wendy Gilles round out the willing vocal horde, in fact, recalling the infamous, serenading Sirens of Greek mythology.

While the heavy and, at times, controversial literary and musical choices Sadigursky has made here negatively impacts the record's repeated listening potential, the young blower remains an enormously gifted and imaginative artist. An explorer on a mission to push boundaries and venture down less-travelled roads, he is undoubtedly one to watch out for. Who knows, he may very well surprise yet again with some drastically different texts by the likes of Ghandi, Gore or Garcia Marquez on a future incarnation of the Project.

Paths; Such Fruit; No Theory; The Dream Keeper; Miss Teen USA; It Takes A Nail; Indecision; The Sea And The Man; The War Works Hard; Therapy; When Death Comes.