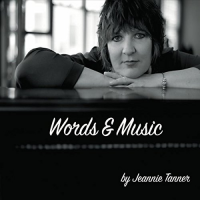 Chicago-based Composer, vocalist and trumpeter Jeannie Tanner has produced quite an album. Not just one but two CDs spanning nineteen songs all of which were entirely composed by Tanner, hence the title of the record. No fewer than twelve guest vocalists were enlisted for this project some of whom doubled on an instrument such as Elaine Dame, who plays exquisite flute and also sang on the breezy "Come Along For The Ride" and the wry-sounding "Red." Another instrumentalist who sings is guitarist Andy Pratt who delivers a country-ish vocal on "I'm Whistling A Tune."

The songs written by Tanner are universally attractive albeit undemanding and evoke a fusion of pop and jazz. Sometimes there are blues numbers too such as "Can't Believe That It's You" featuring Michele Thomas on vocals and Neal Alger on stinging Johnny Winter-like guitar. There are finger snappers such as "Promise Me The Moon" featuring Rose Colella who also appears on CD 1's opener "That Word." The arrangements too are good as evidenced on the brass-rich "Kiss Me" with smoky vocals from Kimberly Gordon who also executes a sultry Billie Holiday-esque delivery on "Mr Midnight."

Whilst the songs—good as they are—are unlikely to find their way into the Great American Songbook, they are in the main, robust and well-crafted, benefitting from often quite moving, sentimental lyrics. The vocalists assembled for this recording are all more than capable and do a fine job. But it's Tanner herself who delivers her project of words and music with excellent skill and judgement that must invite unequivocal praise. Although Tanner didn't sing on this recording date, she certainly had her work cut out. In addition to her role as executive producer she also produced all the vocal and horn sessions and played trumpet. Not many musicians are capable of pulling off something of this magnitude with such seemingly insouciant ease.

CD 1: That Word; Wait for Me; Endless Joy; Reflections in Mirrors; You Can Kiss Me into Anything; Remembering; Fred and Ginger; Mr. Midnight; Can’t Believe That It's You; Come Along for the Ride. CD 2: Kiss Me; Red; Vegas; Be Strong; You’ll Always Have My Heart; It's Never Too Late; My Whole World Is You; I'm Whistling a Tune; Promise Me the Moon.