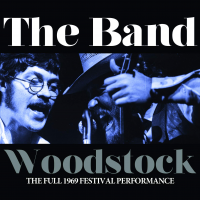 When the Band took the stage at Woodstock, late Sunday evening, August 17, 1969, they were a little over a month away from releasing their second recording, The Band (Capitol, the "Brown Album") and a year past the release of their debut recording, Music from Big Pink (Capitol, 1968). Later, on January 12, 1970, the group was featured in Time Magazine as "The New Sound of Country Rock." All of this was happening smack dab between stints as Bob Dylan's touring band: first for Dylan's 1965 American tour and 1966 world tour, and second for Dylan's 1974 American tour, resulting in the exceptional Before the Flood (Asylum, 1974).

All the while, the Band was creating a brand of music that would not acquire an adequate sobriquet until 25 years later when "alt rock," "roots rock" and ''Americana" were introduced into music reportage. Yes, the Band invented such in the wake of the late-1950s folk music revival and, in anticipation of, Uncle Tupelo, Son Volt, Wilco, Drive By Truckers and the Bottle Rockets. Everything that's old...This was this musical group personifying writer Greil Marcus' vision of an "Old, Weird America," the one from which later hatched Rock of Ages (Capitol, 1972) and The Basement Tapes (Columbia, 1975) , and, by sheer spiritual momentum, rubbing off on Bob Dylan, Blood on the Tracks (Columbia, 1975).

Robbie Robertson, recalling the Woodstock recital for Rolling Stone magazine in 1989 described the performance as "a slow, haunting set of mountain music...everything had a bit of reverence to it. Even the faster songs sounded religious." A touch of benediction among chaos. In his autobiography, This Wheel's On Fire (William Morrow & Co., 1993), Levon Helm likened the atmosphere at Woodstock to "a war zone." Listening to Creedence Clearwater Revival's Live at Woodstock (Craft Recordings, 2019) sounds like the band performing in a hurricane. No matter what analogy is used, the event was momentous, for both the Band and their fans.

In the summer of 1969, the Band was just beginning their march across Americana. It is at once ironic and perfectly suited that the group redefining American music would be made up of four Canadians and an Arkansan, of all things. Robbie Robertson proved to be an excellent storyteller of America as evidenced in this concert with the show stopping, schizophrenic "Chest Fever" and his greatest gift to music, the hillbilly Nativity story, "The Weight" both provided from Music from Big Pink. "Long Black Veil" and "Ain't No More Cane on the Brazos" were old songs newly reimagined, depicting the dark heart of American Romanticism, the one where Norman Rockwell meets Grant Wood and Edward Hopper for a weekend opium-den jag.

To be noted was the inclusion of two soul music classics that would never be out of the Band's concert book. The Holland-Dozier-Holland classic, "Baby Don't You Do It," was originally recorded by Marvin Gaye and released in September 1964. Sung by three of the greatest vocalists of the era, Helm, Danko and Manual, the song transcends its Detroit roots, becoming an anthem of Americana. Covered by the Who and Humble Pie, the song forever belonged to the Band. Stevie Wonder and Ivy Joe Hunter's "Loving You is Sweeter Than Ever," recorded by the Four Tops for Motown in 1966, featured the Band's vocal front again, stripping the song down and adding delta dirt to it. The performances at Woodstock were striking and noteworthy.

Woodstock was where the Band would establish its sea legs, a place from which it would alter the landscape of American music. This performance may not be the best sonically captured example of the Band, but it did demonstrate the group in ascension when anything was possible and realized beyond.

Chest Fever; Don’t Do It; Tears of Rage; We Can Talk; Long Black Veil; Don’t Ya Tell Henry, Ain’t No More Cane on the Brazos; This Wheel’s On Fire; I Shall be Released; The Weight; Loving you is Sweeter Than Ever.