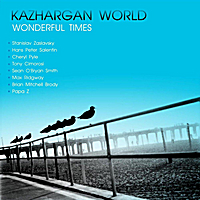 Technology has irrevocably altered everything in its path; the way recordings are made is no exception. A century ago, a nine-person aggregation would have had to hover around a single recording device, playing together, in order for all the participants to make it onto the same record. Now, the members of a nonet don't even need to be on the same continent as one another and everybody can add their parts to the mix at their own leisure. These are wonderful times for those looking to utilize technology to reach out to musicians and artists beyond their own backyard, and this ideal is at the root of Kazhargan World's philosophy.

The members of this international consortium reside in different corners of the world, and many never met one another, but that didn't stop them from banding together in the spirit of creation to make music. Russian pianist Stanislav Zaslavsky spearheaded this project, closing the distance gap between Oklahoma, Germany, New York, Russia and Tennessee to create a cohesive recording. Naysayers may look at such a project and point out that group chemistry is developed over time, and that technology and literal distance can breed a certain sterility and impersonal connection between strangers on the same musical train. They would be right to a certain extent, but musical dialogue and the potential for opening oneself to cross-continental collaboration shouldn't be ignored because it comes with a downside.

Those issues pop up on occasion during this twelve song program, but this band overcomes them during the majority of these times. While a cooperative spirit surrounds this music, the undeniable star is German trumpeter Hans Peter Salentin. His horn is at the center of the most magnetic musical happenings here, and his ability to adapt to, and thrive within, different surroundings is an asset. He can create mood in a non-moving environment—a la Miles Davis—and he is capable of providing fireworks to enliven the party. Cheryl Pyle's flute, which is occasionally too high in the mix, is another important ingredient used for soloing and flavoring. Both of those artists, along with several others, keep things interesting on top while Zaslavsky's keyboard work and electric bassist Sean O'Bryan Smith's slippery lines create texture and interest below.

While this album might have found more focus with a consistent balance between all of the instrumental personalities at play and the removal of several spoken word poetry pieces, the end result is still something marvelous to behold. Zaslavsky has bravely ventured into territory that many are afraid to explore and, in doing so, he's opened a door to pan-global musical communication that many will likely walk through in the future.

Wonderful Times; Children Of The World; Mayan Prophecy; Other Constellations; After Time; Spirit of Discovery; Invisible Celebration; Live Under Water; My Motherland; Irene Was Here; All Day Rain; Cuban Snow.