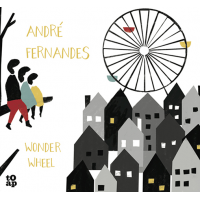 André Fernandes, guitarist with the Orquestra Jazz De Matosinhos, one of Portugal's most dynamic big bands, is an accomplished musician and was obviously hoping for great things with this one. He commissioned Maria Bouza Pinto, an artist who is the epitome of " le cool Lisboa" to design the cover. And he recruited Ines Sousa from the up-and-coming rock band Julie And The Carjackers to handle vocals.

So far, so good, but at this point Fernandes forgot something rather important. He really should have come up with a few decent songs for Sousa to sing.

Instead, obviously hoping that it would be "all right on the night," the idea was that she would scat wordless vocals as his quartet improvised their way around a few "head" arrangements.

It works for a few minutes. On "300 Pessoas (300 People)," Sousa copes well, there's a good solo by Argentinian bassist Demian Cabaud, some interesting keyboard work by Mario Laginha, and a well constructed, gently rocking break by the leader.

The second track, "A Menina Que Tinha Asas (The Little Girl Who Had Wings)," features more excellent piano but by now the wordless vocal is starting to pall. By the third number, " Campo Del Cielo (Sky Field)," penned by Cabaud, it's becoming downright irritating.

On "Down The Road" relief should be to hand. Sousa sings actual words, written by Akiko Pavolka, a Japanese musician based in New York. Unfortunately Fernandes could only come up with a singularly plodding, uninspired score to put behind them.

But then—Hallelujah!—a miracle. Sousa sings a stunning, keenly felt, low key interpretation of the 1950 James Shelton song "Lilac Wine." It ranks up there with the 1978 version by Britain's Elkie Brooks and only ever so slightly below the superbly accomplished revival Miley Cyrus has included in her Backyard Sessions.

Unfortunately, triumph though this is, "Lilac Wine" comes too late. There's another tedious wordless vocal on "Salto Para Lado Nenhum (Jump To Nowhere)" before the title song, a second, undistinguished Fernandes/Pavolka composition. It's all over. Only the hypnotic strains of Shelton's song linger—a sad reminder of what might have been.