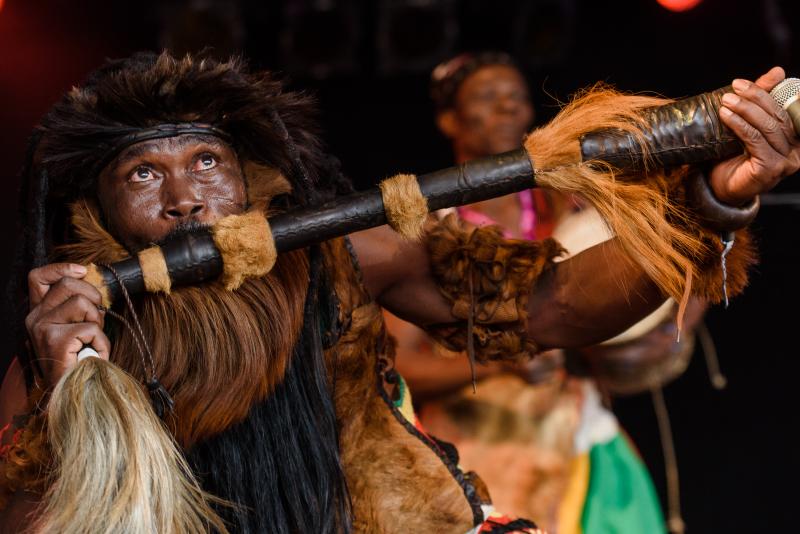 The WOMAD global music festival has mostly been immune to bad weather during its 35 year history. World Of Music, Arts & Dance traditionally occupies the last weekend of July, which mostly guarantees a good scorching. There was the notorious WOMUD of 2007, its debut at the Charlton Park estate, close to Malmesbury in the West Country of England. Then, there was heavy downpouring for parts of the 2015 weekender, but this year's festival came closest to being a WOMUD re-run, even though the re-positioning of the site following 2007 has reduced the squelchy possibilities.

Ultimately, the 2017 festival suffered from persistent rain, enough to entrench a mildly muddy covering, turning much of the event into a slippery and sodden adventure. Whilst half of the main stages were undercover, this still left much of the site over-exposed, inevitably leading to a pall of misery descending a touch too often for relative comfort. Fortunately, the strength of the music frequently won over, but the general conditions created a scenario where many artists had a tough battle to fight. This stated, there were still multiple stretches where the sun reappeared, even as the sucking mud stuck around. The sight of massed mud-stomping and romping during Chico Trujillo's main stage set caused much merriment, as the Chilean ska-cumbia troupe delivered their ridiculously accelerated bounders.

The Brazilian Afro-funkers Bixiga 70 and the veteran Senegalese band Orchestra Baobab opened up the long weekend on the Thursday evening, but it's Friday, Saturday and Sunday that feature the full, bountiful multi-stage line-ups, from noon until deep into the night.

On Friday, the second of the festival's four Brazilian acts played an afternoon set in the Big Red Tent, with Metá Metá revealing a prog-samba orientation, delivering a sound that's in harmony with their country's musical antecedents, but charged with a slightly skewed interest in exploratory rock and jazz moves. A notable highlight of the weekend was provided straight afterwards by Officina Zoe, from Salento in the 'heel' of Italy. Robust with rattling tambourines and a continuously chafing fiddle, the already exciting instrumental sound was topped by the exultant vocals of Cinzia March. Luckily, they were one of the few acts to play two sets over the weekend.

On Saturday, again in the Big Red Tent, traditional ritual chanting from the southern desert of Tunisia was melded with alternative, pouty industrial rock, seemingly from the French-Italian axis. The Ifriqiyya Electrique band (or project) took three vocalists from the ancient Banga tradition, and cast them into a crucible of distorted guitar, bass and electronics. A filmic backdrop formed part of the moody experience, and the three singers began the performance out in audience. Gradually, the guitar duo (otherwise known as the Putan Club) introduced their brutal beats and riffing, except that there seemed to be problems with the laptop input, so these parts were muffled and indistinct. The Tunisian vocals were somewhat tuneless, and the factions didn't knit together as desired. Frankly, it was a mess. Your scribe is certainly not averse to radical fusions: in fact he actively seeks them out, but this was a failure that was admirable in its intentions, if not its reality. Later, there was a wealth of divided opinion amongst your scribe's posse, so at least this group prompted some strong reactions!

Both extreme and funny, the Zhou Family Band spent much of their set impersonating birdcalls and other forest sounds, using their doubled suonas and shengs, both instruments featuring heavily vibrating reed-resonances, one a single- belled horn, the other a complex multi-piped construction. In eastern China, they play for funerals and weddings, the tempo being fast-paced for both ceremonies, the mood usually exuberant in the extreme. They were musically impressive and ridiculously slapstick in nature, often simultaneously.

Your scribe wasn't particularly intending catching Bombino again, having already witnessed this Saharan Tuareg guitarist on several occasions, but upon passing in front of the main stage, en route to elsewhere, he was immediately ensnared and decided promptly to remain where the frazzling desert psychedelics throbbed. Bombino seems to improve radically with each performance...

Shortly afterwards, back in the Big Red Tent, the UK's own Shobaleader One were laying down many grooves, often simultaneously. Otherwise known as bassman (and electronicist) Squarepusher, with a trio of drums/keyboards/guitar sidekicks, this combo operated at an accelerated Weather Report rate, with their leader in full Jaco Pastorius hyper-ventilation mode. Despite being extra-technical-cerebral on the note-counts, radical time-swerving and general finger-twisting complexity, their near-parodic density carried a visceral groinal rush. Speed jazz, speed thrash, speed d'n'b and speed electro were all involved in equal (over-speed) measure, allowing ample chance for wriggly bass solos. All this and identical black-robed garb, with flashing illuminated cyclopean headgear, plus a starkly strobing lightshow!

Now that David Bowie has departed, the Brazilian singer/guitarist Seu Jorge's re-reading of that great master's songbook has taken on an added significance. Despite the fact that it seems slightly strange to hear some of Bowie's lines in Portuguese, although Jorge does keep several key chorus phrases intact in the English lingo. Presumably this is because their Portuguese equivalents sounded just too curious, or rhythmically inappropriate. The emphasis is on the early 1970s Ziggy Stardust-ed period, with not much heard from either the Thin White Duke or Berlin/Eno phases, but this reflects the contents of the original Life Aquatic soundtrack which formed the genesis of this particular touring concept. Ultimately, Jorge created a powerful resonance, but also made us yearn for the original voicings, relying on our sudden flashes of those hallowed recordings of yore.

To climax Saturday night, the Jamaican reggae pioneer Toots Hibbert and his Maytals drew what seemed like the entire festival population around the heaving main stage, to deliver his classic songbook from the late 1960s and early '70s, including "Pressure Drop," "Funky Kingston," "Monkey Man" and "54-46 (That's My Number)." Hibbert is still in fine voice, delivering his songs with a raspy energy, strumming the occasional acoustic guitar part, prompting massive communal vibrations amongst the stretching mass.

Sunday was brighter, even if the mud still glooped on the ground. The day's first winner was King Ayisoba, on the open-air BBC Charlie Gillett stage. The King is ostensibly a traditionalist, but possessing an almost experimental, minimalist drone-intensity, delivering his individualist incarnation of kologo music from the north of Ghana. Ayisoba's booming voice, two-stringed lute-equivalent and his horn-flautist's Abaadongo Adontanga's amply-sized leathery bass version were all deeply resonant, helping to build a repetitive force of buzzing, clattering, chanting release, the players clad in old-school tribal gear, with long-haired hide attachments. The three-part drumming was also crucial to this ritualistic abandonment.

Msafiri Zawose gave a solo performance, again on the Gillett stage, this Tanzanian multi-instrumentalist being the son of wagogo musician Hukwe Zawose, who was a long-standing regular at WOMAD festivals, down the decades. Msafiri's sonic area is very similar to his father's, though in this instance, refined into a solo existence, delivered via a clutch of traditional instruments, which include chiming, cyclic thumb-piano, seed-pod and ankle shakers, as well as the bowed two- string zeze, which he could have chosen more often as his primary instrument. A minimalist palette, but turned into a repetitive, layered and chanted song-form (with whooping and chittering interjections), steadily accumulating in swaying, mesmerising atmosphere.

On the same stage, which was turning out to be the final day's prime location, Leyla McCalla played a gloaming set, captivating a sprawling and largely attentive crowd, all the better for absorbing her often sparse songs. She's a singer and cellist, from New Orleans, although born in NYC, to Haitian parents. McCalla's music lends its ear to the traditions of all these areas, sometimes involving her switching to banjo. The set moved from Cajun to Haitian folk forms, but wherever she's landing, the songs are invested with the governing McCalla personality, which is communicative and passionate. This is how she ensnared and captivated such a large crowd, at just the right time, in the lull before Seun Kuti's Afrobeat-storming set, which effectively climaxed the weekend.

The Nigerian Kuti, a singer, saxophonist and keyboardist, just like his father Fela, was preceded by a very short, and inconsequential set by vibesman Roy Ayers, the two artists being billed together, rather curiously. Then, following an unusual pause in the proceedings, Kuti and his Egypt 80 band hit the stage, to deliver the full enormity of their stage presence. Eventually, very close to set's end, Ayers appeared again, but his presence was extremely low key, hardly trumpeted at all, following the extended romping of Kuti himself, who was absolutely upfront. Seun always operates at some level of intensity, but this set didn't represent the apex of his powers.