By MARK CORROTO
November 16, 2005
Sign in to view read count 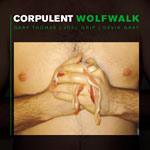 Nobody asks you to take part in a revolution or overturn the status quo. I guess you just believe things should be different (maybe better?) and you jump in. Sometimes to your detriment, sometimes to glory. I'm not talking about the world trade talks, I speak of jazz revolutions, from swing to bebop, the "new thing," fusion, and nu bop.

In the eighties, the response to Wynton Marsalis' new conservatism (sorry, that wasn't a revolution) brought about the rise of the Downtown scene and Brooklyn's M-BASE collective. The M-BASE revolution included the likes of Cassandra Wilson, Greg Osby, and Gary Thomas. While Osby and Wilson have found a safe home back in "the tradition," Thomas carries the flag forward, as evidenced by this new release from the band called Corpulent. The Baltimore-based saxophonist hooked up with drummer Devin Gray, a Peabody Conservatory student, and Swedish bassist Joel Grip. The result is a compelling set of forceful music.

The disc opens with the slow drag "Gryphus Medley, a muscular workout for the trio to announce its presence. Thomas' weighty saxophone sound is balanced against Grip's deep bass groove. It's refreshing to hear a bass mixed evenly in this manner. While Thomas is the star, Grip and Gray are given equal strong voices here.

Gray propels "Who's In Control? with Thomas and Grip walking lock-step with the drummer's pulse. The two play a bit behind the pulse, and you can sense the music can/could take off in many alternative directions. That sense of possibilities is a constant theme on Wolfwalk. The players simmer constantly on the aptly named "Free Piece, the slow burner "Used To Be (V+D), and the compelling "Vanishing Time that ends the disc, leaving you with a very satisfying groove.