By DUNCAN HEINING
August 4, 2018
Sign in to view read count 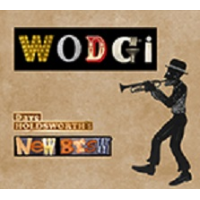 Trumpeter Dave Holdsworth has graced a number of key jazz recordings over the years, notably with Mike Westbrook, Barry Guy and Tony Oxley. At the same time, he recorded rather less than many of his peers from that important period in British jazz in the late '60s/early '70s. Instead of the vagaries of a career in a music outside, Holdsworth chose family life and a steady income. Anyone who has heard his marvellously expressive tone and capacity to subvert the listener's expectations, rhythmically and melodically will welcome his (belated) debut album.

Don Cherry serves well as a reference point. Holdsworth has a broader, softer tone and his approach to a melodic line is less oblique and, for want of a better word, cautious. Both, however, continually surprise and avoid the easy option, whether soloing or contributing to the ensemble.

As to the music here, for me, it recalls—albeit on its own terms—Ornette Coleman's first quartet or Sonny Rollins' trio records. Wodgi has that same sense of open harmonies and strong, singing melodies over a supple, bubbling rhythmic base. More than that, his New Brew sound like a completely played-in ensemble. The music is a springboard for improvisation and, even better, for group interplay.

The title track is a chase with the horns interweaving over the rhythm—it's 'fun' and that's a word we hear too little in jazz. Indeed, despite the clever balance of light and shade herein, 'fun' was an overriding impression left by the record. The same is true of "Harambee II" and "Lickety Split," the two East/South African influenced pieces. Listen also to "About Time" from the four-part suite "Anytime Now" -it certainly brought a smile to my normally sour boat.

There's often a Spanish tinge to several tracks here—that gorgeous meeting of the blues with music that came up through what was once the Spanish Main and that one hears in music as diverse as Gil Evans, Ornette Coleman or Jelly Roll Morton. The lovely "Waiting for the Rain" is one example with fine solos from Holdsworth and Alan Wakeman. The short, echo-laden "Perhaps Tomorrow" is another. The rhythm section of Marcus Vergette, whose arco bass is heard several times to great effect, and drummer Coach York is first rate. There's an instinctive sense about York's contributions that is always just what the music demands. As for, Roz Harding—the youngest player here—she is a remarkably mature and versatile player. Her solo on "Lickety Split" is a joy. Perhaps my favourite track here is "Ten Day Simon," deeply soulful with one of Holdsworth's best solos on the record and some more great stuff from Harding. This is jazz as group music and all the richer for it. What kept you, man?

All About Jazz: When we corresponded some years ago, you told me that you were never a full-time professional musician. What was the day job and how did music fit in with that?

Dave Holdsworth: I was in teaching. For the first five years (1964-9) in a Secondary Modern School and I then transferred to the Further Education Sector. Although it was not the reason to move, I found the flexibility of timetabling and working conditions enabled me to play all the jazz gigs on offer. (Over the whole of my teaching career I only had to dep out gigs on four occasions, two of those being Thursday afternoon matinees with Westbrook's Tyger at the National Theatre.) I never taught music—specialist subjects being English, and History. I retired on health grounds in 1992 by which time I was Principal of Carshalton College.

I stayed a semi-pro as my teaching job was secure, I was married with a family, I only wanted to play jazz and this by itself would never provide the necessary income, I did not want to teach music (a usual side-line for many pro musicians) and I had no thoughts or prospects of studio/theatre/function music work. It worked out very well but would not have done so without my stable family life and the undying support of my wife Nell. I taught a limited amount of music after 2004.

AAJ: Most people will know you from your work with Westy, the London Jazz Composers' Orchestra, Tony Oxley, Harry Miller, Mike Osborne and others. What were your main musical reference points then and how do they relate to what you are doing now?

DH: I arrived in London in 1964 and found myself in the midst of probably the most fertile period of contemporary jazz in Britain. Until I moved to Devon in 2005 I had never turned down an invitation to play jazz -the money on offer (usually little or none) was irrelevant. The diversity of jazz being played was breath-taking, there was a shortage of trumpet players (mainly Kenny Wheeler, Henry Lowther, Harry Beckett, later Dick Pearce and, me) and a great deal going on—big bands (Westbrook, Graham Collier, John Warren, Chris McGregor, Kenny Wheeler, Barry Guy—I played with them all) and countless small groups. Including every Saturday night with the Jim Philip Quintet at the Old Place opposite the Westbrook Sextet.) I was fortunate indeed to play and broadcast with inspiring, wonderful musicians and everything seemed possible. I find no problem in playing with the likes of Tony Oxley and Evan Parker one night and a straight ahead bop band the next. Following the Westbrook ethos, when asked why I play a particular kind of jazz, the answer is 'Why not?' I am entirely happy (then and now) to play across a wide spectrum of jazz but find that when it is my music it comes out sounding the way it does —clearly influenced hopefully by the wide jazz tradition but hopefully bearing my personal stamp.

The Sixties were a time when lots of musicians felt the urge to try things out for themselves -me included. The earliest composition on Wodgi was written in the 1960s, the most recent in January 2018. The first BBC broadcast under my own name -Dave Holdsworth Quartet was in 1968 and included Alan Wakeman. How little seems to have changed?

AAJ: Am I right in thinking that Wodgi is your debut album as leader? If so, what kept you?

DH: In 1990 the Dave Holdsworth-Liane Carroll Quartet released Ten Day Simon (Cadillac). It contains my best recorded version of a standard—"Skylark." I had a quartet with Liane for about four years.

About four years later with funding from South-East Arts, I released an independent recording of my Brighton-based quartet -Lydia's List." (I put it out as a cassette on the assumption it would sell in vast quantities as that is how people would play their music in their cars—there's foresight for you!) I reckon I have been fortunate enough to be a featured soloist on 20+ records. After several years of semi-inertia and waiting for the phone to ring, having found the right musicians, Wodgi is a belated attempt to let my own personal music take wing again.

AAJ: Listening to Wodgi, the first impression is of the openness of the music. The tunes seem to be springboards that could take off in any direction. Was this what you were aiming for with the album?

DH: Absolutely right. I have complete trust in the musicians in the band and built into many the tunes the opportunity to vary tempo, rhythm, key, notes and harmony. I am happiest myself in this situation and get a particular buzz from no knowing quite what is going to happen next.

AAJ: You've been playing with Westy again for a few years now and the other members of New Brew are all from the Uncommon Orchestra. How long have you been working as a unit because this sounds like a truly played in band?

DH: I am delighted at your observation but have to tell you the record was recorded after only two three-hour rehearsals in the two days before we went into the studio. I know these musicians very well—mainly through the Westbrook circus -but I have worked with Roz Harding, Coach York and Marcus Vergette on quite a few occasions in recent years and my links with Alan go back to the 1960s. The only way in which it might have gone wrong would have occurred if I had failed to persuade each of them to explore the opportunities and freedom within the music as they thought best.

AAJ: I suppose, if I had to find reference points to describe the music for readers, these would be Ornette's quartet and Sonny Rollins trio and maybe the quartet with Don Cherry. The rhythms are wonderfully supple and underpin these intricate and melody lines. How would you react to that as a comparison?

DH: With joy and humility. When we were recording, the engineer, not a particular jazz fan, said "It sounds very New Orleans." I was quietly, very pleased, as I myself see a total harmony of spirit across the whole jazz spectrum —why would I wish it to be otherwise?