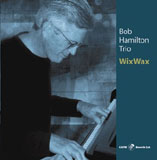 Pianist Bob Hamilton has released a finely wrought debut album on Capri. WixWax is a piano trio album consisting of seven originals plus two standards. Originally from Newark, New Jersey, and a resident of San Diego for the past six years, Hamilton has been on the payroll of James Moody, Joe Henderson and Frank Morgan over the years. It is from Morgan that Hamilton's fast and feathery touch has been singled out and his interpretation of Thelonious Monk's "Ruby, My Dear" has been praised by the altoist. Hamilton also has the ability to report on his resumé that he once sat in with guitar legend Wes Montgomery.

Hamilton uses this opportunity to showcase his originals and, on the first two selections—"Albino Frankie" and "Isabella's Invention"—his up-tempo playing style. In the liner notes, Hamilton cites Oscar Peterson and Count Basie as influences. It is easy enough to hear traces of Peterson on the up-tempo and blues-based tunes, but he has also absorbed a major part of his jazz vocabulary from bebop modernists. On the melodic "Grace" and "Irena Anna," Hamilton displays his ballad touch. On Wayne Shorter's "Lester Left Town," a bebop tune most often associated with the repertoire of Art Blakey and the Jazz Messengers circa 1960, Hamilton skillfully navigates its twists and turns for one of the album's highlights. Victor Young's "Love Letters" closes the album as an attractive ballad.

One of the most positive aspects of WixWax is the interactive aspect of the trio. Bassist Jeff D'Angelo gets a few solos, including the opening of "Isabella's Invention," and drummer Duncan Moore demonstrates plenty of snap, crackle and pop. This trio has an intuitive sound and feels like a working group.