By PAUL OLSON
September 7, 2005
Sign in to view read count 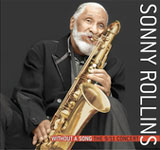 No living tenor player has added more to the jazz vocabulary than Sonny Rollins, and anyone compiling even a conservative list of essential Rollins recordings is going to have great trouble keeping it down in single digits. But as a concert performer, Rollins can be among the most frustrating of artists. Part of that is due to his stubbornly personal notion of what constitutes a good song (this obstreperousness is an inseparable part of his greatness), and part of it is not knowing which Rollins will be performing on any given night. Whether he is performing too many calypso numbers or just playing uninspired tenor, he can seem to almost willfully embrace tedium.

And then there's his band. Without a Song is a live recording of a Boston performance on September 15, 2001—four short days after the date referred to in the title—and it features Rollins with his veteran group of trombonist Clifton Anderson, pianist Stephen Scott, electric bassist Bob Cranshaw, drummer Perry Wilson, and less longstanding percussionist Kimati Dinizulu. These players are not so much restrained and tasteful as they are blandly robotic. The music they make is jazz, yet it's a sort of metronomic karaoke jazz that often does little more than keep time—that time being a soporific, 4/4 automaton swing.

This band's group sound is no more, and no less, than what Rollins desires. And on the five long tracks on Without a Song, Rollins allots everyone way too much solo time. This means many long minutes of trombone improvisation from Anderson, whose solo on "Without a Song" very characteristically seems more a pleasant series of notes allowed by the song's chords than a musical statement with anything to say. Pianist Scott acquits himself only somewhat better, although his solo on "Why Was I Born?" does dig into some real spontaneous emotion.

One can never count the leader out, however. Rollins sticks frustratingly close to the melody of the set's opener, "Without a Song"—the closest he comes to straying from the tune is when he quotes "Oh Susanna" in his solo. But something happens on the next song, Rollins' composition "Global Warming" (yes, a calypso number). Here the leader finds inspiration and unleashes some remarkable tenor work, mixing the tune's melody with slurred, physical, even guttural lines that careen across the beat. His bent intonation and substituted scales are shockingly alive—and wonderful—in this context. Rollins' a cappella introduction to "Why Was I Born?" is almost as good, and while his solo there may not have the thematic brilliance for which he is legendary (he quotes "Oh Susanna" again!), it is exciting and very enjoyable.

The audience greets every solo and musical gesture with rapturous applause. I probably would have done so as well, given the healing power of music and the profound emotion and despair of that time. But it's impossible for this live album to deliver the atmosphere of that evening—and while Rollins has some marvelous moments on Without a Song, there's not enough of him here to recommend the recording to anyone but his most devoted fans.

Without a Song; Global Warming; Introductions; A Nightingale Sang in Berkeley Square; Why Was I Born?; Where or When.