Freddie Hubbard: Without a Song: Live in Europe 1969 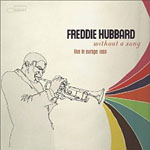 Do you listen to the music of great jazz artists differently once they pass away? This newly-issued live date, with bassist Ron Carter, drummer Louis Hayes and the late pianist Sir Roland Hanna, may elicit nostalgia and sadness mixed with a spirit of wonder and startled appreciation of the recently departed trumpet master Freddie Hubbard.

On the title cut the quartet blazes into the 1929 melody, with Hubbard's trademark masculine sass peppering with staccato phrasing and long fluid lines in sympathetic response to Hayes' rhythmic prodding. While comping and improvising Hanna gives equal weight to his right and left hand figures and takes a solo that scintillates. The pianist's chops always demonstrated his European classical training as a young man in Detroit; it's interesting to contrast his approach to that of, say, Herbie Hancock or Dr. Billy Taylor, also equipped with such training early on.

Ron Carter also was trained in the classical idiom, but his particular pizzicato approach within the jazz genre was an innovation. Carter's subtle command is especially evident on the ballads "The Things We Did Last Summer" and "Body and Soul," his signature phrases, big tone, note selection and embellishments of the beat and chords summoning what he calls "the magic and mystery of the music."

Hayes opens several of the songs with ferocity and inspires Hubbard and Hanna to heights of double- and triple-time intensity on "A Night in Tunisia" and "Blues by Five," droppin' bombs with hard bop soul. They close out with Hubbard's "Space Track," the most abstract, free-jazz influenced number on the date, and the classic "Hub-Tones," where Hayes takes a brisk solo.

This European date is an essential recording in Hubbard's oeuvre in the beginning of the second decade of his illustrious career, a portrait of the legend right before his CTI period.

Without a Song; The Things We Did Last Summer; A Night in Tunisia; Blues by Five; Body and Soul; Space Track; Hub-Tones.