The Vic Lewis West Coast All-Stars: With Love to Gerry

By JACK BOWERS
October 1, 2001
Sign in to view read count 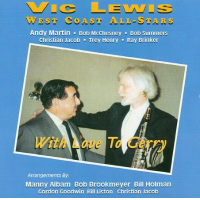 If by "All—Stars" Vic Lewis means a world—class rhythm section backing three superb front—liners, then he's squarely on the mark, as With Love to Gerry (Mulligan, of course) embodies exactly that. There are two exceptions, the opening "Noblesse," performed by an a cappella "trombone choir" (actually, Andy Martin overdubbed), and the luminous "Ballade," handsomely shaped by Christian Jacob's unaccompanied piano. Martin, one of the West Coast's (and the world's) stellar young trombonists, is partnered the rest of the way by another self—reliant 'bone specialist, Bob McChesney, and the vastly underrated trumpeter Bob Summers. The compositions are Mulligan's, the charts by Bill Holman ("I'm Gonna Go Fishing," "Go Home"), Manny Albam ("Walkin' Shoes"), Bob Brookmeyer ("Bweebida Bobbida"), Bill Liston ("I Heard the Shadows Dancing"), Jacob ("Ballade") and Gordon Goodwin (two versions of "Noblesse," one for Martin's "choir," the other for the full sextet).

It remains for the All—Stars to bring each of them to life, a mission they carry out with dexterity and élan. Summers is especially impressive, reminding one, in the way he builds and resolves his solos, and in his striking technical prowess, of the late great Clifford Brown (listen to "Walkin' Shoes" or "Bweebida Bobbida" for convincing evidence). Martin and McChesney are comparably eloquent, while Jacob, bassist Trey Henry and drummer Ray Brinker keep them securely on course with their rhythmic resourcefulness. Besides framing a number of engaging solos, Henry interpolates the melody on the second version of "Noblesse," which ends as the first one began, with trombone choir (this time Martin and McChesney together).

An ardent love letter from six marvelous musicians to a fallen but fondly remembered comrade.