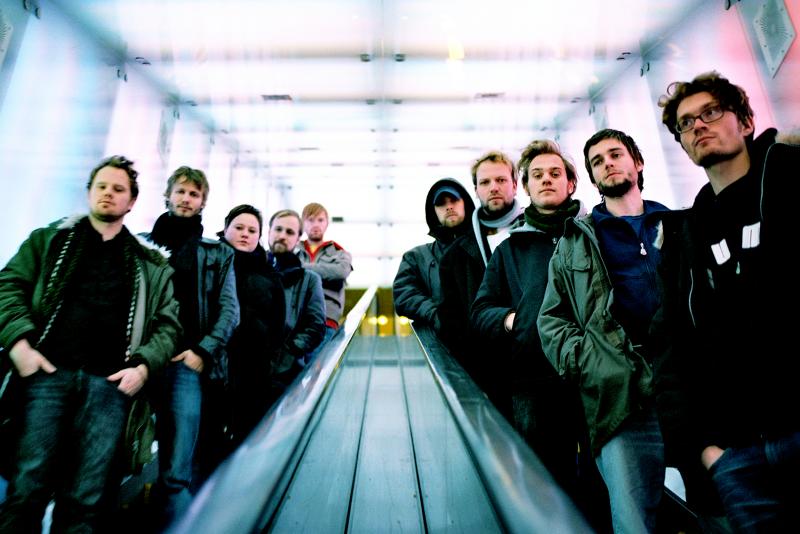 By LARS HORNTVETH
November 3, 2015
Sign in to view read count

Jaga always drives a Karaoke taxi back and forth from the airport in Oslo. —Lars Horntveth

About Jaga Jazzist
If Jaga has any rules, there's really just one: every album must sound like nothing that preceded it. With Starfire, the group that has confounded categorization from inception has delivered yet another album unlike any they've ever done before. Yet, at the end of the day—despite touchstones ranging from Gil Evans to Radiohead, My Bloody Valentine to Tortoise, Oslo 13 to Motorpsycho and Fela Kuti to Steve Reich—Starfire still sounds absolutely like nobody but Jaga Jazzist. The youngest of three siblings that began Jaga in 1994 in the small town of Tønsburg when he was just 14, Lars Horntveth gradually emerged as Jaga's primary compositional voice. Lars, brother Martin and sister Line all demonstrated a strong-willed distaste for orthodoxy—an early reason why Jaga sounds unlike any other band on any scene. All bandleaders, producers, engineers and/or busy session musicians, Jaga's members have always been at the heart of Norway's disproportionately large and vibrant music scene. All the more remarkable, then, that five of its current eight members remain from its early days, with Even Ormestad and Andreas Mjøs still here alongside the Horntveth siblings.

Teachers and/or influences? Mostly self taught, but had a saxophone teacher in the school band until I quit at 12 or 13. His name is Lars Bremnes and is still a good friend of ours. Main influences are Jon Balke, Miles Davis, Tame Impala, Dungen, Jon Hopkins. It changes all the time.

I knew I wanted to be a musician when... I saw Clarence Clemmons play "Born to Run" with Bruce Springsteen on TV around 1985. I loved the red leather, haha.

Your sound and approach to music: Our sound is very much focused on the collective sound rather than soloists. But it varies. Our sound can change very much from album to album, but the melodies I write usually have a certain mood and is quite recognizable. We try to change it up as much as we can from album to album. The newest one is very much a studio album where we didn't rehearse or play together at all. It´s all constructed, almost like a remix. The previous album, One-Armed Bandit, was all written beforehand and we rehearsed for months to be able to play the music "live" in the studio.

Your dream band: Since I´ve had a ten-piece band forever and know how hard that is, I would probably put together a trio, hehe. But no, here´s a quintet instead: I had the pleasure of playing a set of free improvised music in a club in LA a while ago with Blake Mills. He was insane. So he would be in my dream band. Another musician I´ve always loved is Nikolai Hænglse Eilertsen. He plays with Elephant 9 and a bunch of other Norwegian bands. The sickest bassist I know. We actually met and started playing together when I was 15 years old. The rest of the band would consist of Johan Lindström on pedal steel guitar and Gard Nilssen on drums. And myself on reads and guitars.

Road story: Your best or worst experience: About ten years ago our bus driver managed to block the main street in Munich for about three hours. The bus got stuck between two trams. In trying to get it lose, the bus got broken and we had to get another bus to travel to Salzburg. The day after we were back in the broken bus on our way to Prague and came about 5 hours too late to the venue. We managed to play anyways and the show was amazing and full of adrenalin. After the show we drove to Berlin and on every hill we had do get out to push the bus. It was insane, but we managed to play all the gigs and had a blast.

Favorite venue: AB Club in Brussels has always been our favourite venue in Europe. Amazing venue, sound, lights, great programming, amazing food, really nice crew and it was the first place we played outside of Norway so it´s very special for us. We started playing the small stage and have played the bigger stage a bunch of times since.

Your favorite recording in your discography and why? Colin Blunstone's One Year (Epic Records). I think he has the best voice in pop music EVER. Very soft, but still has an edge. Amazing songs and string arrangements. Just never get tired of that album.

The first Jazz album I bought was: Jon Balke Nonsentration (ECM Records). It´s probably the most influential album on Jaga´s sound ever.

Did you know... Jaga always drives a Karaoke taxi back and forth from the airport in Oslo. We usually take early flights, but still sing all the way to the airport. Sometimes to much annoyance for say half the band.

How would you describe the state of jazz today? I probably don´t follow the genre as much as other people. But for me it seems quite healthy. At least for the kind of jazz music I listen to. I don´t follow traditional jazz at all anymore. So for me jazz is improvisation and all the different styles you can combine that with. There´s a lot of good music coming out of that scene I think.

What are some of the essential requirements to keep jazz alive and growing?
Just being curious and not afraid of music that can "destroy" jazz. I think there will always be enough people that wants to listen to traditional jazz or what have become tradional (like Coltrane for example). So there is no reason not to go the other way and try to make something new(like Coltrane did).

What is in the near future?
We´re currentlt touring with Jaga Jazzist in Europe. We are also planning a lot of shows next year. Other than that I´m producing three albums with different Norwegian acts at the moment. I´m also touring with Todd Terje as well as making music for theatre. The rest of the guys in the band are the same. Always a lot of different projects at the same time.

What's your greatest fear when you perform?
A very small one: I fear that I will start thinking about my laundry or something similar instead of just floating with the music. I guess I´m lucky I don´t have stage fright or anything like that.

What song would you like played at your funeral?
"Concierto De Aranjuez"

What is your favorite song to whistle or sing in the shower?
"Something In The Way You Are" with Kimbra