John Pizzarelli: With a Song in My Heart

By WOODROW WILKINS
October 5, 2008
Sign in to view read count 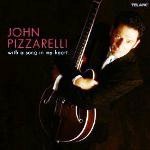 The American Songbook. There are times when those three words make a music listener cringe: Oh no, another album of old songs. That's not the case with John Pizzarelli. There's something about his guitar, his vocal style and the arrangements that make his recordings fun and interesting. That's doubly so on With a Song in My Heart, Pizzarelli's tribute to one of the great writers who contributed to the songbook: Richard Rodgers.

Pizzarelli began playing guitar at age six. He followed the footsteps of his father, Bucky Pizzarelli, and also learned from Erroll Garner, Les Paul and Django Reinhardt. He has created some original music, but he's widely known for updating classics, covering music by such legends at Nat King Cole, The Beatles, George Gershwin and Frank Sinatra. And he's one of the few jazz artists to get national television exposure, having made several appearances on such programs as The Tonight Show with Jay Leno, The Late Show with David Letterman, Live with Regis & Kelly and The CBS Early Show.

Accompanied by his trio—brother Martin Pizzarelli on bass, Tony Tedesco on drums and Larry Fuller on piano—and a small horn section, Pizzarelli kicks off with the title song. This delightful arrangement puts emphasizes the horn section and also features a piano solo by Fuller. The bass and drums also make their presence known.

Bucky Pizzarelli joins his son on "It's Easy to Remember." The band sits this one out as father and son take a fond trip down memory lane. This Rodgers & Hart collaboration was featured in the 1935 film Mississippi. Band leader Benny Goodman liked to play this song when John and Bucky Pizzarelli opened for him during John's youth. It's a tranquil, intimate song.

The band comes back in with "Johnny One Note." Andy Fusco contributes a playful alto saxophone solo. The song shifts gears from a high-speed chase to an easygoing drive. Pizzarelli scats on the fade.

"Mountain Greenery" presents some more gear-shifting music. The song starts slowly as Pizzarelli sings about the dreary city life. Then, as he heads to the mountains, the pace accelerates. Guitar and scat, riveting piano and horns for backup put the fun in this song.

Hearing the same old songs covered time and again can become trite, if not boring. However, Pizzarelli has a knack for keeping things interesting. In this case, he does justice to Richard Rodgers while maintaining that element of individuality that lets you know With a Song in My Heart is all Pizzarelli's.

With a Song in My Heart; This Can't Be Love; I Like to Recognize the Tune; It's Easy to Remember; Johnny One Note; Nobody's Heart; Happy Talk; Mountain Greenery; I Have Dreamed; The Lady Is a Tramp; She Was Too Good for Me; You've Got to Be Carefully Taught.

Title: With a Song in My Heart | Year Released: 2008 | Record Label: Telarc Records