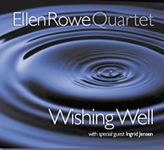 Sometimes, less is more. In the case of Wishing Well, the Ellen Rowe Quartet delivers plenty of good sound, simply by playing rather than trying to be trendy.

Rowe has been part of groups led by musicians as diverse as Ray Charles and John Zorn. Born in Ridgefield, Connecticut, she began playing piano by ear at the age of 4. Her jazz studies began in high school.

Bishop's tenor begins the swinging "Lewisburg Bluesy-oo." With the bass and drums laying a finger-snapping groove, Rowe goes off on a delightful jaunt, followed by Bishop. All others stop while Krahnke solos on bass. After the melody resumes briefly, Siers gets to show off a little.

"Night Sounds" starts softly with piano and bass. The mood picks up when Bishop and Siers enter. The song inspires a vision of wandering through the city under the night sky. Rowe plays with verve, comparable to David Benoit or Dave Grusin.

"Tick Tock" is another finger-snapping tune. The melody mixes in some stop-time phrases. After Bishop and Rowe solo, Krahnke puts bow to bass. While the others take a break, Siers works the toms and snare, throwing in some cymbals action later.

Wishing Well is more than an hour of music, with Rowe composing nine of the 10 tracks. The quartet has been together since 2002, but this is only their second release.

For That Which Was Living, Lost; Lewisburg Bluesy-oo; Night Sounds; Tick Tock; Longing; Sanity Clause; Wishing Well; Seven Steps to My Yard; For Donald; Alone Together.