Various Artists: Wish You Too. Best Christmas Ever. 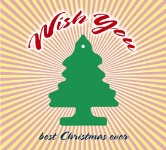 If there's such a thing as a cliche about the only Christmas-themed compilation you'll ever need, then this one was made to justify its existence as it's probably that very thing. It's a riot too, of the sort likely to upset the purist as it takes in both Booker T. And The M.G's and the Ramones.

But that's not the only thing that lifts the spirit. Binky Griptite's slinky "World Of Love" is filled with sincere optimism, even while it doesn't go above a loping medium tempo. It's a hell of a contrast with The Waitresses' "Christmas Wrapping," which comes on like Blondie with a better developed sense of irony. It's nothing short of a great lost Christmas single, and whilst the same can't be said for Coconami's take on "Sleigh Ride," any listener who remains unmoved by its modest glories is probably a little too close to death for their own good.

Sonny Boy Williamson II's "Sonny Boy's Christmas Blues" has enough life in it to move mountains and the sheer beguiling force of the man's personality comes through just like it always did. The Staple Singers' "Who Took The Merry Out Of Christmas?" is shot through with righteousness, even while it mines a very different vein of slinkiness to the one discussed above. There's sly funk in there too, of an order sufficient to make even the most devout non-dancer regard the dance floor as something other than that space they have to walk across to reach the bar.

The fervour of "When Jesus Was Born" by the Sons Of Heaven is by turns of a different order, the product of deep belief sincerely held. The harmonies are certainly something else, namely the product of an amount of schooling sufficient for the task at hand but not detrimental to the impact of the music; the professionalism is joyous, capable of lifting the spirit and putting a smile on the face.

Carla Thomas does the same on her "Gee Whiz, It's Christmas" which for all of its opportunism still manages to hit the spot, not least because the folks at Stax prove they were just as able to hit it here as they were on anything else they put out. Mood plays an equally important part on the following "Gonna Have A Merry Christmas" by the Nic Nacs with Mickey Champion, where the underlying motive would apply regardless of what time of year it was.

Back Door Santa; Who Took The Merry Out Of Christmas?; World Of Love; Winter Wonderland; When Jesus was Born; We Wanna See Santa Do The Mambo; Santa Claus Boogie; Je Et Tu Croient Plus A Pere Noel; Christmas Wrapping; Merry Christmas (I Don