Chantale Gagné: Wisdom Of The Water

By DAN BILAWSKY
February 11, 2011
Sign in to view read count 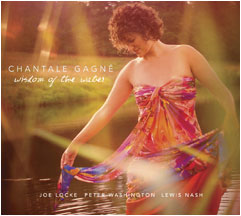 In many ways, water is the ultimate life force. Approximately seventy percent of the Earth's surface is covered by water and more than half of the human body is made up of water. Perhaps, it was with this in mind that nature endowed water with a certain degree of logic in motion. Water often flows ever-forward in endless streams of beauty, creating deep ripples within the very fabric of its moving form, and the same can be said for much of the music that pianist Chantale Gagné creates on Wisdom Of The Water.

On this, her sophomore effort, Gagné has crafted a program that demonstrates her ample skills behind the piano, while highlighting her compositions, which balance accessible ideas with unique harmonic hues. The can't-miss rhythm team of drummer Lewis Nash and bassist Peter Washington that appeared on her debut—Silent Strength (Self Produced, 2008)—return for round two, providing just the right touches in all the right places. While Gagné was clearly happy with her rhythm men, she obviously wasn't content to repeat herself, and she chose to augment this ensemble with the addition of the inimitable Joe Locke on vibraphone.

Both Locke and Gagné give off a similar sense of emotional radiance, embodied by the warm cocoon of sound they create on tracks like "Over The Bridge"—co-written by Locke and Gagné —and "The Light We Need." A sense of longing lives in these pieces and Gagné proves to be masterful in the molding and shaping of her own creations. While Locke's presence is most impressive in these types of setting, he also proves to be an asset on more lively fare, like the squirrelly "Squinky Pete." Gagné and Locke deftly move through single note lines together before Nash and Washington launch into a swinging groove. Locke is his ever-impressive self during his solo spot, Gagné tosses off her spunkiest solo on the record, and Nash is given some room to let loose before the head returns.

While Gagné is clearly a competent soloist and expert musical architect, her gifts aren't limited to these two areas. She proves to be a solo pianist with great range, as demonstrated by her ability to move from reflection and rumination ("Lullaby For Winter") to rubato introductions for pseudo-saloon piano playing ("Roseline"), and she takes a keen interest in providing bassist Peter Washington with a platform that he so richly deserves. It's a far-too-frequent occurrence for bassists to be buried beneath the rest of the band, but Gagné gives Washington more than his fair share of solo space, and uses his cello-like pizzicato work to provide the introductory melody on "My Wild Irish Rose." Gagné's ability to showcase her own skills, while proving to be selfless in highlighting each member of the band, is telling.

From the first note to the last, Wisdom Of The Water presents the wisdom, warmth, passion and promise inherent within the work of up-and-comer Chantale Gagné.

Wisdom Of The Water; Over The Bridge; My Wild Irish Rose; Squinky Pete; Roseline; The Light We Need; Waking Dreams; I Shall Not Be Moved; Lullaby For Winter.