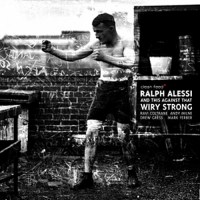 Born out of the jazz laboratory of Brooklyn's M-Base experiments of the 1990s, trumpeter Ralph Alessi has always seemed to be a farouche player. Never hankering for the spotlight, he always seems satisfied to turn in solid deliberate efforts that don't court flattery. Maybe it is his subtle nature, but what some might have missed has always been picked up by his fellow musicians. He has been called upon by the likes of Fred Hersch, Uri Caine, Jason Moran, Don Byron, and Sam Rivers to complement some significant musical statements the last few years.

One of his ongoing projects, This Against That, is a like-minded affair with fellow M- Base graduates Ravi Coltrane and Andy Milne. These birds of a feather have collaborated on each others' projects for the last decade and share a self- effacing approach to music making.

Like Cognitive Dissonance (Cam Jazz, 2010) Alessi employs Milne and bassist Drew Gress, but adds Coltrane and drummer Mark Ferber. Wiry Strong is composed of 15 tracks, four of which are short group improvisations built to complement the remaining Alessi-penned works. Like the improvisational sketches, the music is quite attentive to atmosphere. Alessi paints modest scenes in which the players interact, usually in pairs. The trumpet and bass first trade lines on "A Dollar In Your Shoe," then saxophone and piano, while Ferber energizes the mood. On "20% of the 80%" the piano and bass are in lockstep, while the title track has a bit of trumpet and drum gymnastics. Alessi eschews the theme-solo-theme mode for this varied palate of tones and attitudes. Coltrane is a perfect collaborator for this presentation, tailoring his sound to the mood at hand. Each piece is quite inconspicuous, revealing itself not as blatant theater, but as fine-drawn and discerning storytelling.