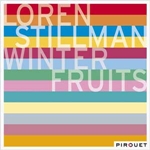 Loren Stillman's Winter Fruits is an impressive follow-up to the saxophonist's stellar Blind Date (Pirouet Records, 2007). The increasingly visible altoist has been spotted on a number of recordings including Paul Motian's On Broadway, Vol. 5, (Winter & Winter (2009), yet found time to refine his own music. Through a couple of lineup changes with new members Ted Poor (drums) and Nate Radley (guitar) and the return of Gary Versace (now on organ), Stillman's release maintains a stylized and highly substantive persona.

Dispelling any notions of typical jazz organ ensembles, Stillman's organ-centric quartet (also known as the collective called Bad Touch) performs compositions that are denoted by an aesthetic of mood, darker hues, and lush contours that are uniquely atmospheric. "Muted Dreams'" lovely song casts the die with elongated lines as the momentum gently rises and falls, like waves on a shoreline.

The way the group interacts with one another is sublime; each voice counteracting as the musicians play an intense game of "cat and mouse" on the stealthy antics of "Skin." The instruments are like varying brushes on canvas—Radley's inquisitive string work, Versace's cathedral-like keys, Poor's powerful or gossamer percussion, and Stillman's exquisitely lush voicing—painting every composition in layered detail. From the isolated solos in "Song To Be Played" to the bombastic title where the organ pedal reverberates against a pulsating beat; reaching a sweltering climax. The recording's finale, "Puffy," is another jewel—a tone poem of breathtaking beauty.

When Winter Fruits is juxtaposed against Blind Date, the contrast is distinct. It is totally different yet retains Stillman's creative core. The art of reinvention.

Muted Dreams; Skin; Man of Mystery; With You; Like a Magic Kiss; A Song to Be Played; Winter Fruits; Puffy.