By DOUG COLLETTE
February 26, 2018
Sign in to view read count
Jazz Journal is a regular column consisting of pithy takes on recent jazz releases of note as well as spotlights on those titles in the genre that might otherwise go unnoticed under the cultural radar. 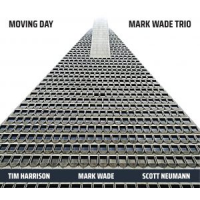 Often ghostly in its ambiance, the music on Moving Day is always flawless in its execution. The Mark Wade Trio are seemingly further inspired with each successive moment in which the three interact, then move on to the next composition. And the transitions, within and between tracks, are so fluid as to be almost indecipherable: the unity of this band may be its greatest asset, but there are many, not the least of which is the material, most of it original in the form of the stately closer "In The Fading Rays of Sunlight." But there are also two selections which are standards: bassist Wade, pianist Tim Harrison and drummer Scott Neumann share a glorious rediscovery of "Autumn Leaves" and, in keeping with the fundamental ingenuity understatement at the heart of this album, "Another Night in Tunisia" only subtly references its sublime reinvention. 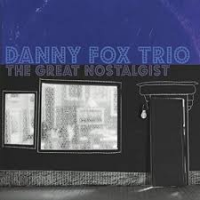 Just one more illustration of the piano/bass/drums alignment as one of the most durable in the genre of jazz, this album belies its title in a delightfully wry way. Fox sets the pace at his keyboard, whether ruminative or rollicking, and the rhythm section is with him every step of the way, not just following the leader, but also prodding his imagination with their own ideas, of which there are more than a few. It's a measure of the threesome's discipline, combined with an individual and collective humility, that what might've been of surfeit of motifs, within all original material, are instead parceled out in a proportionate balance rendered all the more laudable by a 'You are there' recorded ambiance (as befits the informality of the recording sessions). 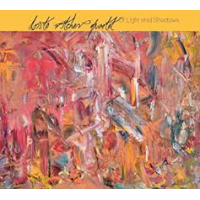 Hristo Vitchev's guitar work may never transcend facile comparisons to Pat Metheny. Likewise, by extension, splendid recordings such as Of Light And Shadows. But it's arguable the leader has become so highly-evolved as a musician, composer and bandleader over the years that he it's no small achievement he remains naturally in touch with the inviting simplicity heard on this quartet outing. Liquid guitar flows in and out of equally fluid piano lines, while bass and drums supply an undercurrent as nimble as it is vigorous. The transitions between solo(ist)s might be a bit looser and less polite, but that formality only underscores how repeated listenings to this album become increasingly rewarding. 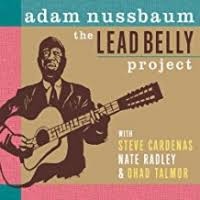 As cleverly executed as it was conceived, Nussbaum and company's homage to the iconic folk-blues figure finds them getting inside this music and effectively turning it inside out to stellar effect. Aligning himself instrumentally and psychically with guitarists Steve Cardenas and Nate Radley and equally intuitively with saxophonist Ohad Talmor, the percussionist leader functions as the catalyst in such a way the foursome creates sounds that transcend time and place: precisely on the cusp of blues and jazz, all eleven tracks come off sounding simultaneously of the era in which they originated and deeply rooted in our idiosyncratic, contemporary culture. Virtues abound here one of the relatively lesser of which is how The Leadbelly Project would make for a great subject in a blindfold test to see what musiclover might guess its source (and be suitably delighted right or wrong)! 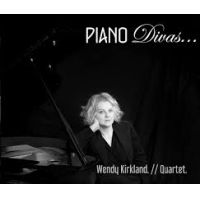 Alternately winsome and seductive, Kirkland leads her ensemble with consistent authority through an eclectic assortment of tunes that allows her to stretch her vocal chords as much as her fingers on the ivories. Likewise, her accompanists flex their muscles in as robust approach on Ben Sidran's "Be Nice" as the more predictable likes of Bobby McFerrins "Don't Worry Be Happy." And, as roundly evinced on the two originals here, "Bahia" and "Samba Chica," there's a hearty continuity throughout the dozen tracks: an assertive attitude in the musicianship underscores its generally melodious, delicate touch, which is as nuanced and efficient as the CD packaging enclosing it.

Tracks: Moving Day; Wide Open; The Bells; Another Night in Tunisia; Something of a Romance; Autumn Leaves; Midnight in the Cathedral; The Quarter; In the Fading Rays of Sunlight

Tracks: The Shortest Wavelength; Selective Absorption; At Your Side; Prelude to Prismic Dance; Prismic Dance; Pentachromatic Butterflies; A Portrait of a Love Forgotten; Partial Darkness.

Tracks: Come Dance With Me; Bahia; Slow Boat To China; Some Other Time; Hey Good Lookin'; It's Not Unusual; Be Nice; Samba Chica; Don't Worry Be Happy; Cheek To Cheek; My Baby Just Cares For Me; Meet Me Midnight.