By EDWARD BLANCO
November 12, 2012
Sign in to view read count 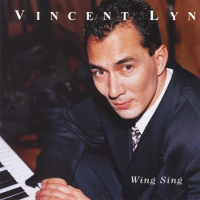 Kickboxing champion, movie star and pianist Vincent Lyn takes flight on Wing Sing, his second album as leader, with a dynamic, upbeat smooth-styled session of jazz that appropriately follows up to his Grammy-nominated debut, Heaven Bound (Self Produced, 2011). Lyn has always been a goal-driven fighter with a desire to be at the top of his game, so it's no surprise that he chose Wing Sing for the title of this project; it just happens to be the Chinese translation for "To always win."

Lyn presents ten original compositions, a reprise of the light and beautiful "That's What You Do To Me," and adds a groovy arrangement of the Burt Bacharach classic "Walk On By," featuring Michelle Bradshaw's Dionne Warwick-like background vocals, guitarist John Gerardi'a riffs and percussionist Urbano Sanchez, Jr. Though peppered with some R&B sounds, the music is primarily smooth jazz, beginning with the lively "Red Sun," featuring Lyn's core group of bassist Curtis Long and drummer Gil Hawkins, Jr..

Throughout, Lyn performs on either piano or keyboards, and is at his best on the hot, contemporary-tinged burner "Cantowood," where his speed and stylized piano technique provides the defining moment of the set. "Cote D' Azur" is one of those clear R&B sounds showcasing Lyn's appreciable talents and a strong performance by Hawkins, as he pounds his drums into submission. The group returns to the smooth side on the sensational and spicy "See You In Rio," featuring Gerardi's rock-like riffs, as the leader takes to the keyboards.

There are plenty of entertaining smooth sounds, including the wonderful "Be Mine Tonight," "Wake Me Up," and the brief "Take Flight," all making this an album worth sampling. Certainly no less impressive than his sparkling debut, Wing Sing is an encore performance documenting another winning musical statement from pianist Lyn, taking the smooth jazz genre to another level.